Cop Shows Under Scrutiny As CBS Brings In Outside Advisors 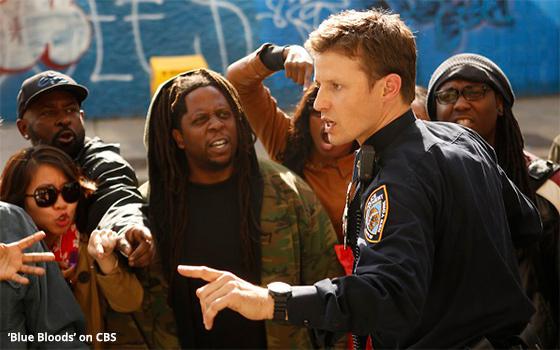 The TV Blog first raised the subject in June: Our TV cop shows are suddenly in a bind following the death of George Floyd at the hands of Minneapolis police on May 25, and the protests and riots that came after.

Seemingly overnight, attitudes about police and policing changed, with protesters and civic leaders calling for urban police departments to be defunded and diminished.

In the midst of the uproar in mid-June, the TV Blog wondered whether TV cop shows have a future at all, or whether they might go the way of TV Westerns and disappear from TV altogether.

Or at the very least, would cop shows have to be reframed somehow to reflect the new reality? The new reality seems to be that many people now regard police as the enemy, and not as trusted public servants whose job is to protect and serve.

On TV shows (such as “Blue Bloods” on CBS, pictured above), most police are portrayed as heroic -- people doing the best they can under difficult and dangerous circumstances.

The fact that police are not seen as heroic by many in real life these days would appear to present a challenge for cop shows.

Now, in this summer of uncertainty and change in all aspects of business and society, the nature of TV's cop shows is now beginning to be reconsidered by the networks and producers who make them.

One announcement came just this week: CBS has hired an outside law enforcement and public safety advisory firm -- Chicago-based 21CP Solutions
-- “to consult with the writing teams on their police, crime and legal drama series,” according to a press release from CBS.

The news release was characteristically vague about what exactly these outside advisors will be looking for, or changing or adding when it comes to the process of writing and then staging TV's cop, crime and court shows.

Cynical producers and writers for the shows that will now presumably be on the receiving end of notes from these outsiders might be rolling their eyes in the aftermath of this announcement that basically predicts and sets up interference in their work.

Or maybe they will welcome this outside advice as beneficial in such uncertain times.

Or -- and this is entirely possible -- the hiring of this outside firm is just for show and will amount to nothing.

The CBS news release did not say which shows would come under scrutiny by the new outside advising team, but the network has a number of shows that probably will be affected.

There was no word this week from the other networks about their own efforts, if any, to reframe or change the way they make their law enforcement series.

Clearly, however, changes are afoot in the TV cop realm. In an interview that was widely reported in June, actor Terry Crews of “Brooklyn Nine-Nine” revealed that producers of the NBC cop comedy had four scripts ready to be filmed, but scrapped them in the wake of the anti-police riots.

“They had four episodes all ready to go and they just threw them in the trash,” Crews was quoted as saying. “We have to start over. Right now, we don't know which direction it's going to go in.”

What led to the episodes being scrapped? Crews apparently did not say. It could be that producers of TV cop shows in general are unsure themselves at this point about what is acceptable and what is not.

television
1 comment about "Cop Shows Under Scrutiny As CBS Brings In Outside Advisors".
Check to receive email when comments are posted.
Next story loading