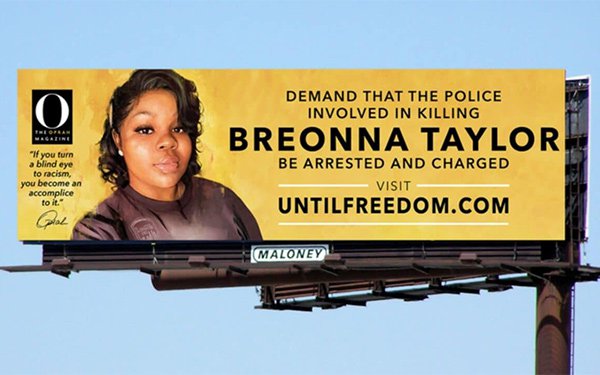 This month, O, The Oprah Magazinereleased its latest issue with a cover dedicated to Breonna Taylor, who was killed by police in her home in Louisville, Kentucky last March. Now, to accompany that issue’s call for justice for her death, the magazine is covering 26 billboards in Louisville with Taylor’s portrait.

The portrait was created by digital artist Alexis Franklin and marks the first time Oprah doesn’t appear on the cover of her magazine.

The billboards, one erected for each year of Taylor’s life, read: “Demand that the police involved in killing Breonna Taylor be arrested and charged.” The message includes a website for social justice organization Until Freedom, which worked with O to create the billboards, Louisville’s Courier Journal reports.

Until Freedom will also “occupy Kentucky” to work toward getting justice for Taylor.

A quote from Oprah also appears on the billboard. It reads, “If you turn a blind eye to racism, you become an accomplice to it.”

Since Taylor’s death, officer Brett Hankison has been fired and two others, Jonathan Mattingly and Myles Cosgrove, were put on administrative leave. However, no one has been charged in her death.

Installation of the billboards was expected to be completed by today.