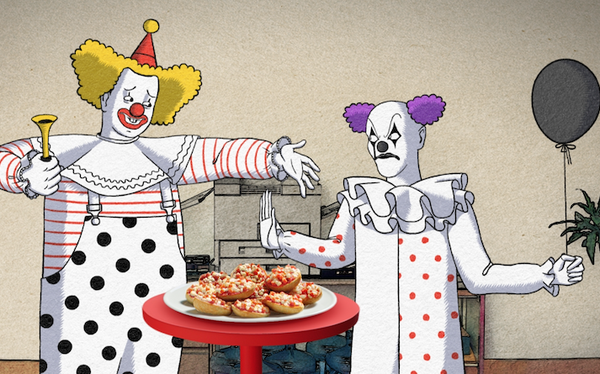 Bagel Bites pizza bagels have made their first return to television advertising in more than 15 years as part of a broad and wacky campaign that visualizes “cultural debates.”

Those debates take the form of comical back-and-forth conversations between animated characters. They ponder things like whether clowns are scary or silly, if ponies are cuter than unicorns and whether the egg preceded the chicken—or vice versa.

“Bagel Bites has always brought this element of fun and lightheartedness to the snacking category,” Bagel Bites associate marketing director Sarah Barnes tells Marketing Daily. “When we started to work on this campaign, we really wanted to embrace that.”

It’s the first work for Bagel Bites from the Johannes Leonardo agency, which won the business in late 2019.

In one 30-second spot, two dogs separated by a dish of pizza bagels wear similar pants but on different parts of their bodies.

“What are you wearing, dog?” says one pooch.

“They’re pants, dog,” the other responds.

The banter continues until a voiceover intervenes: “Pizza on a bagel. We can all agree on that.”

In a spot with two clowns—one obviously good, the other evil—the good one asks “Don’t you just love the look on the kids’ faces?”

“Yeah, that look of pure terror,” says the evil one, adding, “and that second right before the first tear comes.”

The campaign concept derives largely from consumer research. “We spoke with people all across the country, dug into different online communities and unearthed a lot of these fun debates. I think there were something like over 60,” says Barnes.

In addition to digital placements, the spots will run on more than 60 TV networks.