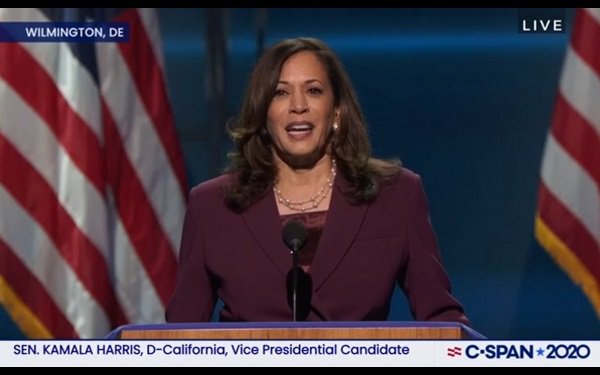 If Tuesday night’s Democratic Convention show was designed to uplift and inspire, then Wednesday night’s episode was its direct opposite.

Tuesday’s show had ordinary Americans from across the country and around the globe happily nominating Joe Biden as the Democratic candidate for president. It was a joyful display of American optimism.

By contrast, the emphasis on Wednesday was on the nation’s faults. The subjects covered included guns, domestic violence and climate change.

True, some of the stories told by prominent women speakers undoubtedly inspired and resonated with other women.

Women were evidently the target audience for Wednesday’s Democratic pitch to America -- the third night of this week’s four-night virtual Democratic National Convention.

The speakers included Hillary Clinton, Nancy Pelosi, Elizabeth Warren and, at the conclusion of the show just before 11 p.m. Eastern time, the party’s nominee for vice president, Kamala Harris.

However, the best speech of the night -- at least how it played on television -- was given by a man, Barack Obama.

Positioned with great symbolism inside Philadelphia’s Museum of the American Revolution, the former president was elegant and eloquent.

His whole demeanor stood in stark contrast with the Democrats’ principal opponent in this election, Donald Trump. This was probably the point.

Whether or not one agreed with President Obama’s policies or points of view, the man has a way with words. He is a great speechmaker.

On the subject of Trump, Obama was candid. His words hit home. “I have sat in the Oval Office with both of the men who are running for president,” Obama said.

“I never expected that my successor would embrace my vision or continue my policies. I did hope, for the sake of our country, that Donald Trump might show some interest in taking the job seriously; that he might come to feel the weight of the office and discover some reverence for the democracy that had been placed in his care.

“But he never did. For close to four years now, he’s shown no interest in putting in the work, no interest in finding common ground, no interest in using the awesome power of his office to help anyone but himself and his friends, no interest in treating the presidency as anything but one more reality show that he can use to get the attention he craves.”

One can quibble with or even debate some of the points Obama made, but the words were so well-chosen and well-delivered that their fundamental truth was unassailable.

His speech scored a bull’s-eye both in its attack on Trump and in its sincere, wholehearted and evidently very personal endorsement of Joe Biden, who served as Obama’s vice president for eight years.

But so much of the rest of the two-hour Democrat show was given over to the nation’s woes. Exhibit A in this two-hour tribute to America the Terrible was the appearance by sad teen Billie Eilish.

She is all of 18, and enjoying huge success as a young pop star due at least in part to the opportunities that are available here in America to people with the kind of talent she possesses.

But brooding sadly over the world and its problems from a teen point of view is apparently part of her brand (as it were). So, in the convention show Wednesday night, she complained about America and the world in a sullen monotone.

“You don’t need me to tell you things are a mess,” she said sadly (and she was right -- no one needed her to tell us that). “Donald Trump is destroying our country and everything we care about.”

And a child will lead them? Thankfully, this was not the takeaway from Wednesday night’s episode of the Democratic Convention show.

With President Obama as her lead-in, Kamala Harris took the stage at a nearly empty arena in Wilmington, Del. She gave a predictable speech that emphasized her family and parentage -- i.e., her identity as the daughter of an Indian-American mother and Jamaican father.

In ordinary times, she would have made this nomination-acceptance address before a noisy, rambunctious crowd of convention-goers. But this year, she was seen in an arena in which a handful of silent spectators were seated like props on folding chairs at least six feet away from each other.

The atmosphere was more somber than celebratory. In fact, in this year of COVID lockdowns at home, she might have been better served by the producers of this convention show if she had made this speech from the comfort of her own home, surrounded by family.