The Answer Is Yes, It's Supposed To Be A Bad Thing 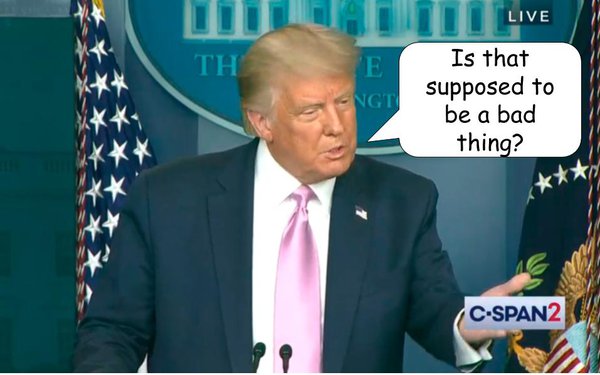 Of all the questions posed by White House correspondents to presidents, I never would have imagined the one NBC News' Shannon Pettypiece raised Wednesday when she asked the President if he was behind a conspiracy theory promoted by QAnon that he is "secretly saving the world from this satanic cult of pedophiles and cannibals."

Nor his answer: "Is that supposed to be a bad thing?"

People may debate whether he is serious, or just trolling us, but I have always believed the real answer is it's just part of his methodology. Like other con men, he uses double talk to confuse, distract and misdirect us from what he is actually doing. Unlike other con men who are just trying to separate us from our money, this one is trying to separate us from our democracy. And he's succeeding.

Whether it is socially conditioning America that QAnon conspiracists are just "people who love our country," or -- as he did with Marjorie Taylor Greene -- endorsed her as a "future Republican star." Or whether it was sowing enough doubt in absentee voting and the dependability of the U.S. mail during a pandemic to question the legitimacy of the 2020 election, he is winning the war of words.

"That’s his special gift. That’s his super power," Ipsos political polling expert Chris Jackson said during his regular monthly briefing on the 2020 Presidential election today, adding, "He has this ability to influence the news cycle more than any other President in history."

And whether the President is the one creating it or that he's just really good at leveraging it, Jackson described the current news cycle as "chaotic" and a "cacophony" that moves so fast that the single most important theme influencing the election changes almost daily (see Ipsos analysis below).

While the COVID-19 pandemic has been a top concern among American voters for months, Jackson noted that the story du jour ebbs, flows and changes based on the President's daily misdirection. The President's and his postmaster henchman's attack on the postal service were enough, Jackson implied, to fundamentally undermine confidence in the integrity of the election.

According to the most recent Ipsos polling he released today, two-thirds of Americans are concerned about both "voter suppression" and "organized voter fraud." This is true, regardless of party, though for different reasons (see data below).

Despite his super powers, Jackson notes that the incumbent remains mired by a considerable gap (eight percentage points) vs. his rival Joe Biden in terms of approval, and that the race ultimately will come down to how effectively the President swings voter sentiment between now and Election Day in the key battleground states.

Jackson said the tide has been moving in Biden's direction, and that Biden actually leads the incumbent on two of the three top issues voters are concerned about: a plan for recovering from the pandemic; and his ability to restore trust in American government.

While the incumbent has a marginal advantage on the third key issue -- the economy -- Jackson said the physical reality of the pandemic, and its economic effects, would likely be the biggest factor driving that by Election Day.

In terms of the impact down ballot, Jackson continues to see Democrats retaining control of the House, but that the Senate could ultimately end up a 50/50 split with the next Vice President being the deciding vote on legislation.

During the Q&A at the end of Jackson's presentation, two interesting observations were made. One concerned the potential impact of Kanye West getting on the ballot. Jackson noted that West missed the deadline for most states, but that he'd likely draw 3% of the vote in states he manages to get on the ballot on, and that it would likely draw from Biden. Overall, he implied the impact would not be significant.

Lastly, he disclosed that Ipsos has surveyed Americans on who they believe is more "cognitively" fit.

"More Americans think Biden has the cognitive wherewithal to be President than Trump," he said, adding, "Take that for what it is."

Overall, Jackson says the President has been losing support from Republicans, especially "highly-educated" ones and those that live in more urban and suburban areas.

He did not offer any data on how the President is polling with QAnon supporters.

government, media, politics
6 comments about "The Answer Is Yes, It's Supposed To Be A Bad Thing".
Check to receive email when comments are posted.
Read more comments >
Next story loading