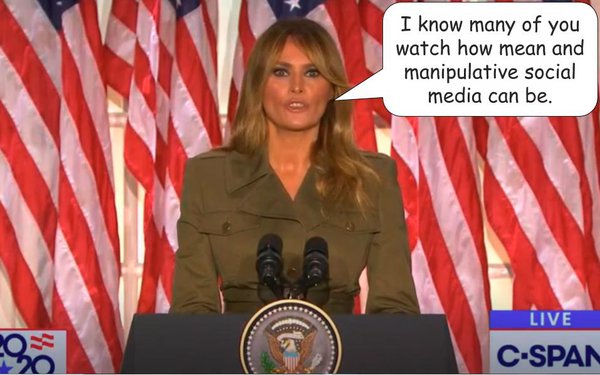 The highlight of Day Two of the Trump National Convention featured the First Lady’s attack on the media for focusing on “gossip” and ignoring the opioid drug crisis. It came a day after the convention opened with gossip about members of the extended First Family delivering their speeches under the influence of drugs. In fairness, cocaine is not classified as an opioid.

The First Lady’s speech was an amalgam of other hypocrisies, including her nod to “the mothers of this country” struggling to raise their children in an era of “mean and manipulative social media” (see @realDonaldTrump on Twitter), and most hyper-hypocritical of all, that she sees one of her chief roles as restoring “the people’s house,” including “the ground and all they represent,” days after she cut down the roses other people symbolically planted there. You know, all the other First Ladies’ rose bushes in the Rose Garden.

In terms of tone, Day Two -- with a few exceptions -- struck a softer tone than the first day of the President’s convention, including reality TV-like stunts in which the POTUS performed miracle-like gestures -- pardoning a bank robber and granting immediate citizenship to a group of immigrants -- but also broke another American norm that President’s aren’t supposed to use taxpayer properties like the White House, or the powers of their office, for campaigning.

While the President and the Vice President are exempt for an actual law prohibiting that -- The Hatch Act -- it makes it illegal for cabinet members like Secretary of State Mike Pompeo or National Economic Council Director Larry Kudrow to do so. But what are you going to do, impeach them?

Overall, the Day Two production was an odd mashup of tone, content and style, including the three-minute sizzle reel that preceded the First Lady’s speech, Pompeo’s delivery during an official State Department visit to Israel, and two second-string First Kids (Tiffany and Eric).

The Trump Convention narrowly avoided taking a bullet on Day Two, bumping a speech at the last minute from Trump Campaign Advisor Mary Ann Mendoza, when news outlets reported she tweeted a link to a QAnon conspiracy about a Jewish plot to enslave the world and urged her followers to investigate it.