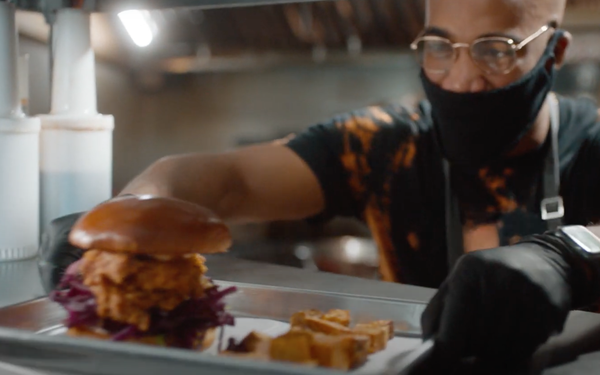 If you're among the tens of millions of Americans who are alternately longing for a restaurant meal and dreading the risks that come with it, the National Restaurant Association has your number.

“Many restaurants were able to pivot pretty easily to takeout and delivery,” says Tia Mattson, the organization’s executive vice president of marketing and communications. “But way back in March, we knew we were going to have to do something to help dine-in restaurants recover. On-premise dining is critical, and we wanted to create a campaign that would encourage people to get back to restaurants. We wanted to let people know it’s safe, and to remind them about what they’ve been missing.”

The stakes continue to be dire. The organization says the foodservice industry has lost $165 billion in revenue through July and is on track to lose $240 billion this year. So far, about 3% have folded, which is about 15,000 to 20,000 restaurants. By the end of December, Mattson expects that number to reach 100,000.

The Richards Group, the ad agency behind the ad, “did such a beautiful job, taking in all the visuals and emotional sounds. The campaign captures the joyful moments people remember in restaurants, as well as some of the safety cues,” she adds.

Restaurants are the second-biggest employer in the U.S., and while many jobs have returned since March when 6 million lost their gigs, the industry is still down some 2.6 million jobs.

With research showing that more than half of Americans still doubt the safety of dining out, restaurants are keenly aware they need to do more to educate consumers about precautions, Mattson tells QSR Land.

With the association’s ServSafe Dining Commitment, it hopes to reassure diners about steps restaurants are taking to keep them safe.

“The Sounds We Crave,” is the first-ever national consumer effort from the NRA. And partners, including Coca-Cola, DoorDash, Stella Artois, Beam Suntory, Cargill and Hormel Foods, all ponied up to help make the media buys.

She says the effort is scheduled to run through the end of this month, including networks and streaming services. With 65% of the budget on TV and 35% running digitally, the campaign is targeting people between 25 and 54.

“Our goal is to try and capture that percentage of diners still reluctant, and to welcome them back.”

Still, distancing requirements means restaurants can’t function at full capacity, and as virus rates tick back up and cold weather awaits, “the next few months will be critical,” Mattson adds.

In New York, for example, a new study forecasts that close to two-thirds of the restaurants in the state may have to shut down without additional government relief.

The NRA is pressing the government to establish a relief fund.

Governments around the world are responding in different ways. In the U.K., for example, the government funded an “Eat Out to Help Out” policy for August, aimed at encouraging consumers to go out for meals.

The government paid 50% of the bill, up to an equivalent of about $13 per person, for people to eat out on Mondays, Tuesdays, and Wednesdays. (Alcohol wasn’t included.) The endeavor boosted sales, with the BBC reporting that 100 million meals were claimed. But observers say a more important outcome may be that it coaxed many people -- who often hadn’t been to a restaurant since the pandemic began -- back into the dine-out economy again.