122 Years After Founding, Cramer-Krasselt Looks To The Past To Guide Its Future 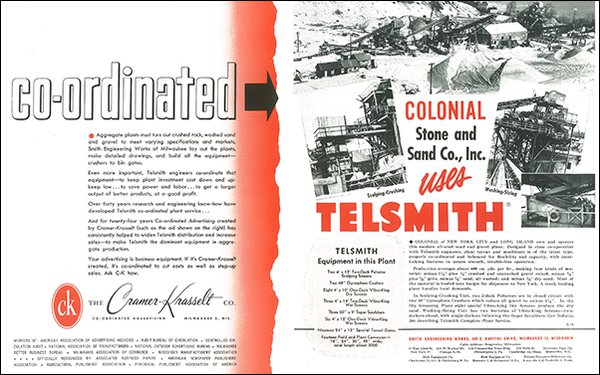 Cramer-Krasselt is celebrating its 122nd anniversary this month by looking back through its historical documents to understand how C-K’s past can help position it for future success.

C-K formed when two bicycle enthusiasts named Cody Cramer and William Krasselt started printing a pamphlet called “The Wheelman” for their bicycle club in Milwaukee, Wisconsin. When companies who sold bicycles and parts got wind of this pamphlet, they wanted to put ads in it, but didn’t know how or what to say. Cramer and Krasselt stepped in to handle the penning of ads as well as printing them.

“From the gate, even back then, C-K really did it all—writing, designing and printing every element a client might need from the ads, billboards and catalogs to old bill stuffers that companies would use in the mail,” explained Peter Krivkovich, CEO of C-K since 1998. “There are even stories about how we wrote and published corporate newsletters, fun stuff like Quality Biscuit Co.’s ‘Cracker Facts’ and Pabst’s ‘Blue Ribbon News.’”

During the 1918 pandemic, the agency won new accounts for brands like Ladish Malting Co. and Stratton-Ladish Milling Co. along with better-known names like Maytag and Waukesha Motors.

The agency’s next step in interconnectivity came in the 1940s when then-president A. Walter Seiler more fully introduced the idea of "Coordinated Advertising” by pledging to investigate every possible marketing solution, from trade shows to packaging to advertising, to build a client’s brand. In addition, C-K has institutionalized the practice of not letting a single client or category make up more than 20% of agency billings.

“Right now, and in the last recession, it’s been pivotal that we have never let one medium dominate us—we have media, programmatic, search, social, data, analytics, production and we keep expanding our depth because it makes us better marketers,” states Krivkovich. “Even when we don’t have, for example, our client’s media business, we know media and its impact. We’re good partners because we ‘get it’ and have the whole ecosystem under our roof.”

This summer C-K’s search and media teams partnered to set T. Marzetti up across the leading platforms (Kroger, Walmart, Instacart, Albertson’s) for paid sponsored advertising. Most of T. Marzetti’s brands fall into the perishable category, which online grocery consumers had historically shied away from. But being able to quickly make their products top of mind in the space helped in producing an average of a $4.00 return on advertising spend.

In addition, C-K found itself helping Corona Extra on an unusual predicament earlier this year during the health crisis. As longtime creative agency, both sides analyzed if and how the coronavirus pandemic would hurt Corona, the brand. Behind the scenes, C-K and Constellation (Corona Extra’s parent company) were already working quickly to review all current and upcoming content and messaging along with social media sentiment, while also producing new work to reinforce the brand’s values. In March, for example, the agency helped to develop Corona’s $1 million donation to the Restaurant Employee Relief Fund announcement along with a Cinco de Mayo program #CincoAtHome, that encouraged consumers to support their favorite local bars and restaurants. The concerns that consumers would abandon the brand amidst the COVID-19 crisis were unfounded and Corona sales have remained strong.

The agency has also been adding to its roster. Earlier this year, it was announced that the agency also retained Porsche after a procurement-mandated review. It’s the second time the agency has held on to the brand during such a review. Other clients include the Alzheimer’s Association, Cat’s Pride, Cedar Fair, Cintas, Pacifico Beer, and Cotton Council International.

“We are winning business and we are doing strategic work very quickly right now because we actually walk the walk—even while working from home,” said Krivkovich. “This would be impossible without having the level of interconnectivity that we do, and all the capabilities we’ve invested in. It’s not new to us because of the pandemic. It’s part of who we are and I’m really proud of that and how our people have seamlessly stepped up for our clients.”