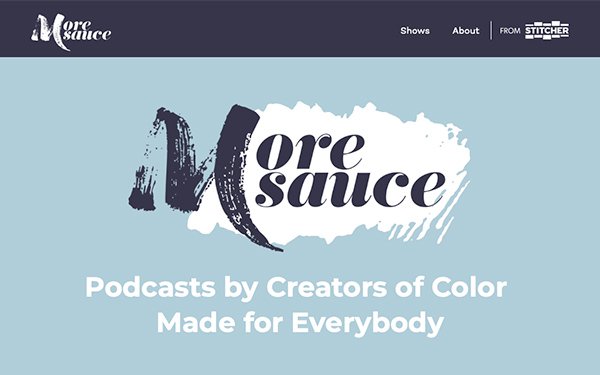 The new shows include “The Salon” and “Porsha4Real.”

"The Salon" features actress-influencer Lala Milan welcoming listeners into her “beauty salon,” where she and guests discuss sex, relationships, no subject is taboo. “I wanted to bring a nostalgic feeling of the hair salon with a fearless new touch of radio to podcasts,” stated Lala Milan. The premiere is Oct. 5.

“Porsha4Real" features TV host Porsha Williams, her sister and mother as they explore of love, life and motherhood. It is slated for this fall.

“More Sauce aims to create memorable content through the lens of Black experiences to help listeners have a community they can go to, to take a break from daily routines and the harsh realities society is facing today,” added T. Square, Stitcher’s executive producer of original programming.

Founded in 2007, Stitcher is a subsidiary of The E.W. Scripps Company and available on both iOS and Android devices.

The popularity of the medium was highlighted at the IAB's 2020 Podcast Upfronts. Alexis van de Wyer, CEO of SiriusXM-owned www.AdsWizz.com, shared new data illustrating how ad trends and listening habits have changed due to the pandemic. He noted two trends: Podcast listening in June was 21% higher than January 2020, and podcast advertising is up +44% from January to June 2020.

Separately, iHeartMedia has teamed with ViacomCBS Entertainment & Youth Group to create create dozens of new original podcasts over the next three years, utilizing existing CBS franchises, such as MTV, Comedy Central, VH1, CMT. For example, “The Daily Show with Trevor Noah” will expand its podcast library.