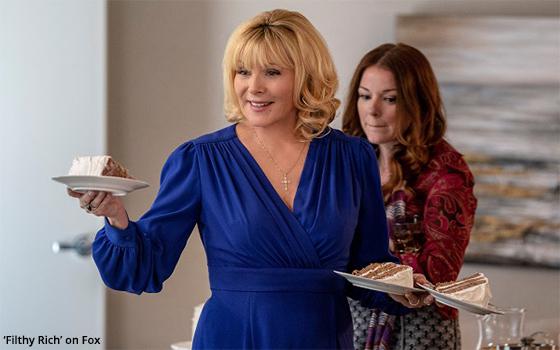 The fall TV season starts on Monday with a show that is a throwback to a past era of network television.

The show is called “Filthy Rich,” starring Gerald McRaney and Kim Cattrall (pictured above) as the patriarch and matriarch of a wealthy family of televangelists.

Premiering Monday night on Fox, “Filthy Rich” earns the distinction as this year’s first new fall show to premiere on the first evening of what is traditionally the first week of the fall television season.

With its over-the-top take on a super-rich family with secrets and incestuous rivalries, “Filthy Rich” is descended from the likes of “Dallas” and “Dynasty.”

Despite that lineage, however, any resemblance between this week and past fall-season starts is purely coincidental.

In fact, this week is not like any other first week in the history of fall TV seasons in one important aspect -- namely, the near-complete absence of new, original shows.

This is the week when each evening of prime time would ordinarily be full of them. But due to the COVID-19 pandemic and the restrictions that were placed on TV and film production, almost none of the shows the networks wanted to premiere this week are ready for prime time.

By happenstance, however, Fox had “Filthy Rich” on hand and ready to go reportedly because it had been produced originally to premiere this past spring -- which means production on the show preceded the pandemic lockdowns that began last March.

The show (not to be confused with the Jeffrey Epstein documentary on Netflix that is also called “Filthy Rich”) appears to be the only new, scripted original on the networks this week.

In lieu of new, original shows, the networks are offering shows such as “L.A.’s Finest” on Fox and “Manhunt: Deadly Games” on CBS -- both repurposed from Spectrum Originals.

CBS has also brought over the modern-day “One Day at a Time” sitcom from Netflix to air on Thursday nights starting this week.

And ABC will fill up some of its prime-time hours by continuing into the fall season with some of its summer game shows starting this week -- “Celebrity Family Feud,” “Press Your Luck” and “Match Game.”

As for “Filthy Rich,” the show is atrocious. Among other things it is an insult to Christians and southerners who, the last time I looked, are people too.

Like scores of other groups, they do not deserve to be stereotyped on a prime-time TV show.

Specifically, for no apparent reason, the show seems to take direct aim at Joel Osteen, the Houston-based television pastor whose sermons on Sunday mornings are among the most pleasant things you can watch on TV all week.

And yet, this show’s producers have cast an actor, Aaron Lazar, who bears a striking physical resemblance to Osteen -- and styled him to look like Osteen even more -- to play the unlikable role of star preacher of this televangelism family’s flagship TV show. Surprise, surprise -- it is not a flattering portrayal.