If You Don't Have The Virus, You Can Still Buy It This Halloween 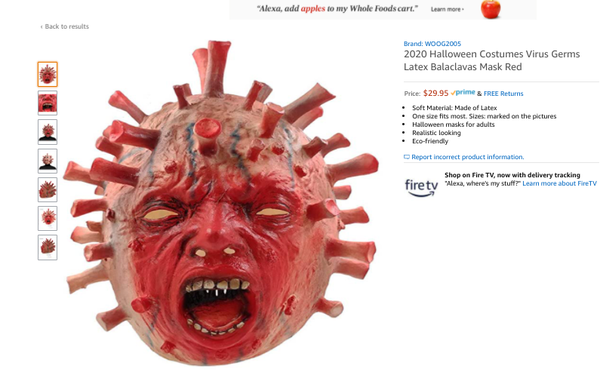 Since the pandemic began, its crisis moments have jumped from holiday to holiday. Prevention experts have urged Americans to celebrate Memorial Day wisely, then Independence Day, and then Labor Day.

Next up is Halloween, a time when it’s customary for older people, at least, to use dress-up for sociopolitical commentary -- though some just prefer scary costumes.

This year, a trend rearing its ugly head is itself the ugly head of the “Horror Virus Bacterial Mask.” In other words, the mask that represents what the virus looks like under the microscope -- an image that's all-too-current, certainly frightening -- and is being marketed to adults and children.

A relatively expensive version costs $36.97 on Amazon. The manufacturer’s description reads,  “Our horror virus mask with lifelike detail is scary enough that many small kids are afraid to come near.”

That one is greenish, but Amazon has several varieties that come in blood red, which looks a lot more like the model you may have typically seen on television. Those cost in the $20-$30  range..

On Etsy, a seller is offering a special $72 mask that promises “you’ll be the hit of  the party." The description says, “Be the first to get my COVID-19 light-up Halloween mask.” It comes with  an on-off switch for the LED lights.

Who would think of marketing such a thing?  Kansas City Star reporter Lisa Gutierrez checked Twitter, and found that by March, a lot of consumers had already come up with the idea in tweets, most seemingly hoping that it wouldn't happen, but also acknowledging it was such a morbid idea it was a certainty. .

There is  scary -- and then there is SCARY. Online Kamora Costumes is marketing a $180 custom-made “Karen” mask that pays reverse-homage to the fictional archetypal middle-aged white mom who feels entitled to loudly announce her views and consumer clout.

Those are sold out, but the masks have gotten outsized attention from a Yahoo story picked up by several web sites.  A  cheap alternative  might be a popular T-shirt being sold that contains an a “Hi I’m Karen” nametag decal next to the sentence, “I need to speak to the manager.”

It’s a little too early to read the market. Indeed, this year, it would seem, a go-to Halloween mask might be souped-up versions of the ones many have been wearing since March anyway.

And who knows? Last year Americans spent $8.8 billion on Halloween costumes, decorations and candy, according to the National Retail Federation.

“The pandemic has created challenges with Halloween, but you can't cancel a holiday," says James Zahn, senior editor for the trade publications The Toy Book and Toy Insider. “Halloween is happening and kids will still be dressing up, but how families celebrate will be different."

He says many retailers have already reduced orders, but also notes an upside. “Fortunately, there has been a lot of growth in 'everyday dress-up' in recent years, and a lot of kids and some grownups enjoy wearing costumes year-round.”