Foot Locker Will Use Its Stores To Help Register Voters Nationwide 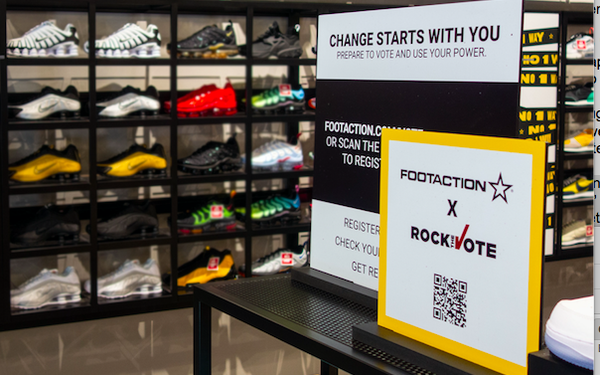 Foot Locker stores nationwide will become a voter registration hub starting next week, dovetailing with the Rock the Vote organization that’s trying to make sure younger people cast ballots in this election.

The effort comes as National Voter Registration day approaches on Tuesday and as Rock the Vote revs up for the stretch between now and various voter registration deadlines nationwide, and the election itself.

Displays at 2,100 Foot Locker (and associate brand) stores will let customers check their voting status, get voting information or even register to vote by using a QR code that’s prominently displayed.

Foot Locker’s voter assistance tools are the same ones a consumer could access online -- but its program means someone can register while shopping for a new pair of Nikes. For young people who are also shoppers, the tie-in may be convenient.

The company says Foot Locker accounts on Instagram are followed by 4.3 million people between the ages of 18 and 24, which is the prime demographic Rock the Vote is eager to get.

According to Rock the Vote, more than four million people will become eligible to vote for the first time in this election.

"At Foot Locker, our mission is to inspire and empower youth culture, so partnering with Rock the Vote was a natural fit to help educate and amplify the voices of today's youth,” said Richard Johnson, the chairman and CEO of Foot Locker Inc., in a statement.

The company also pledged to make it easy for its employees -- many of them young -- to make their schedules flexible enough so they vote. The retailer will provide its employees “access to a platform of extensive resources”  to help them make informed voting decisions.

Foot Locker’s Footaction brand store, which it acquired in 2004, is a member of the voter organization’s   “Brands for Democracy” group using social campaigns and its ad clout to help the turnout at polls and via mail. Other members include Gap, Aeropostale, Athleta, Door Dash and Yelp, and several media-related companies such as HBO.  Zumiez, a youth-oriented  sportswear retailer that competes with Footaction, is also a member of that group.

How many young people will turn out to vote this year is complicated by the COVID-19 crisis and hot issues around voting by mail. Pew Research notes 2016 was the first time the number of baby boomers who voted (67.9 million) was exceeded by the voter turnout of three generations of younger voters: Generations Z, millennials and Generation X voters combined for 69.6 million votes. But historically, young voters are a hard-to-get bunch.