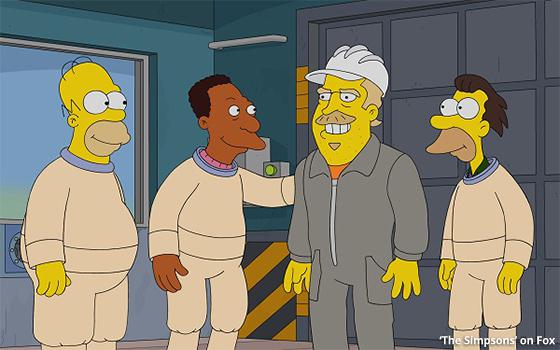 “The Simpsons” sends up a long-running series on another network to start its unprecedented 32nd season this weekend.

The series is “Undercover Boss” on CBS -- the reality series in which CEOs disguise themselves as ordinary working folk and then infiltrate one of their stores or franchise restaurants as a “new” employee to learn about the challenges their workers face every day.

In the “Simpsons” season premiere Sunday night on Fox, “Undercover Boss” becomes “Undercover Burns” as the tyrannical patriarch of the Springfield Nuclear Plant, C. Montgomery Burns, dons an elaborate disguise as “Fred Kranepool” and befriends co-workers Homer, Karl and Lenny (all pictured above).

David Harbour of “Stranger Things” provides the voice of “Fred.” He is one of two TV luminaries who guest-star in voice roles in the episode.

The other is Phil Rosenthal -- creator, executive producer and writer on “Everybody Loves Raymond” -- who now hosts food-and-travel shows such as “I’ll Have What Phil’s Having” on PBS and “Somebody Feed Phil” on Netflix.

In this Sunday's “Simpsons” episode, Rosenthal -- playing himself -- turns up at Moe's Tavern where he has an unfortunate encounter with one of Moe's rancid bar snacks.

The season premiere demonstrates that “The Simpsons” is still going strong. It continues to have something to say about our contemporary world.

The show's longevity as a creative enterprise is also aided significantly by the fact that its animated characters never age. For that matter, the show's main voice artists are all still around too, even if they -- unlike their cartoon counterparts -- do age.

“The Simpsons” is the longest-running scripted prime-time series in television history. The qualifiers “scripted” and “prime-time” are necessary because a handful of unscripted TV series have been on longer.