Utilizing physiological data -- galvanic skin response, heart rate and facial expressions -- based on neuroscience methodologies, we analyzed the 2016 Donald Trump/Hillary Clinton presidential debates, as well as the Joe Biden-Paul Ryan vice presidential debate and the September 2019 Democratic primary debates, to see what can we learn from the past that might help us better anticipate what might transpire in tonight’s debate?

If the Biden who debated Ryan in 2012 turns up for these debates, he’ll greatly outperform expectations.That Biden handily won that debate with sharp and witty responses that better energized his base and responded effectively to Ryan attacks beat by beat. But analysis of the 2012 also exposes what will potentially be a major challenge for Biden this time around (stay tuned for details below).

As can be seen in the figure above, comparing Republican vs. Democrat voter response using galvanic skin response, there was an overall downward trend throughout the debate. Interpretation: voters got bored as the debate progressed. But the debate has a clear pivot towards the middle of the debate, after which Democrats are more energized. That moment follows a comment by Ryan referring to John F. Kennedy – to which Biden replied: "What, now you’re Jack Kennedy?"

That moment exposes what may be one of Biden’s greatest debating strengths: His capacity to be witty on an impromptu basis.

Neurometric data from Biden’s September 2019 primary debate performance, although far more limited given the relatively short duration of time during which he spoke, shows a far more restrained candidate.

A more restrained Biden will rely less on impromptu wit and more on pre-packaged lines, which often fall flat with viewers. Of course, expectations are so low that just surviving without any major gaffes is probably good enough to claim a "win."

So expect a more restrained Biden, perhaps incorporating more empathetic appeals rather than witty humor. Biden probably won’t be aiming for a knock-out. He’ll be doing the rope-a-dope.

The Trump that turned up in the 2016 debates kept the debates engaging through the end (unlike the typical downward trend), even for undecided voters who typically evoke significantly lower responses throughout a debate. The galvanic skin response of both supporters and undecided voters is illustrated in the figure below. 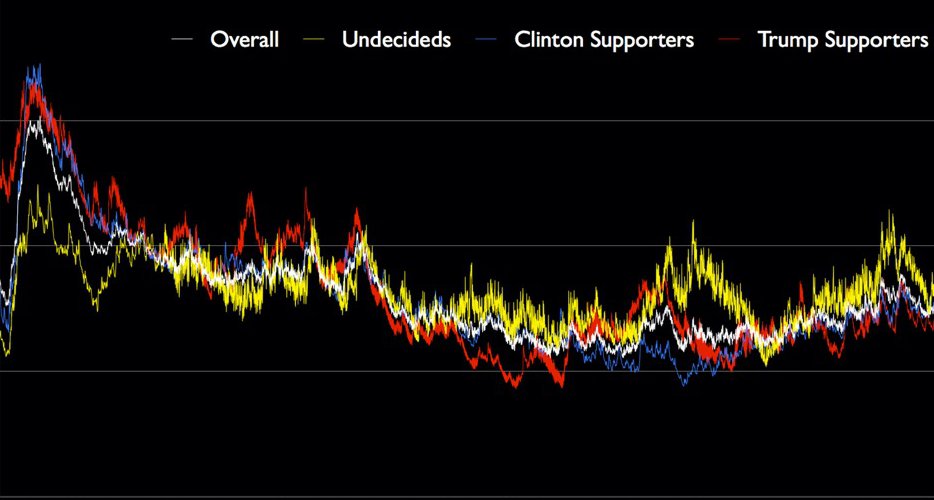 A key and unusual feature of the 2016 debate was strong negative association (detected using facial expression analysis) of Clinton among Democrats, highlighting an enthusiasm gap between supporters. That’s unlikely to occur in tonight’s debate. But there are other characteristics visible in the data that are potentially likely to recur.

For example, Trump did surprisingly well among undecided voters when factoring emotional metrics. Such voters were far more engaged during policy discussions throughout the debate – and here, Clinton’s responses were often evasive while Trump’s were decisive -- "in my first 100 days..." -- irrespective of whether they were factually correct. On an emotional level, undecided voters responded well to Trump’s decisiveness.

There is little doubt that Trump will be equally decisive tonight. What is not known, of course, is whether, like Clinton, Biden will also be evasive. If so, on an emotional level, at least, this will work to Trump’s advantage.

Likewise, there was no shortage of both extreme and questionable assertions made by Trump. In a rational universe, each would further sink a candidate. But the Trump effect, and particularly the sheer frequency of such assertions, demonstrates a ‘desensitization’ effect such claims. With each subsequent half-truth, viewer reaction diminishes in intensity – normalizing over time.

What Trump realizes, perhaps, is that emotional dynamics outweigh the rational.

So expect plenty of half-truths (and that’s being kind) and exaggerations – it’s all part of Trump’s DNA and is likely to shape the contours of the entirety of tonight’s debate.

Tonight’s debate should prove to be engaging to its end. In one corner, expect to see a restrained Biden playing rope-a-dope, looking to win by remaining standing while avoiding any major gaffes. In the other corner, expect plenty of fireworks – with sensational and sometimes invented assertions designed to appeal to emotional instincts. In its subtext, therefore, tonight’s debate will really be about the battle between the rational and emotional dynamics of voter response.

3 comments about "A Neuroscientific Guide To Tonight's Biden/Trump Debate".
Check to receive email when comments are posted.
Read more comments >
Next story loading