Fear & Loathing On Top Of The World 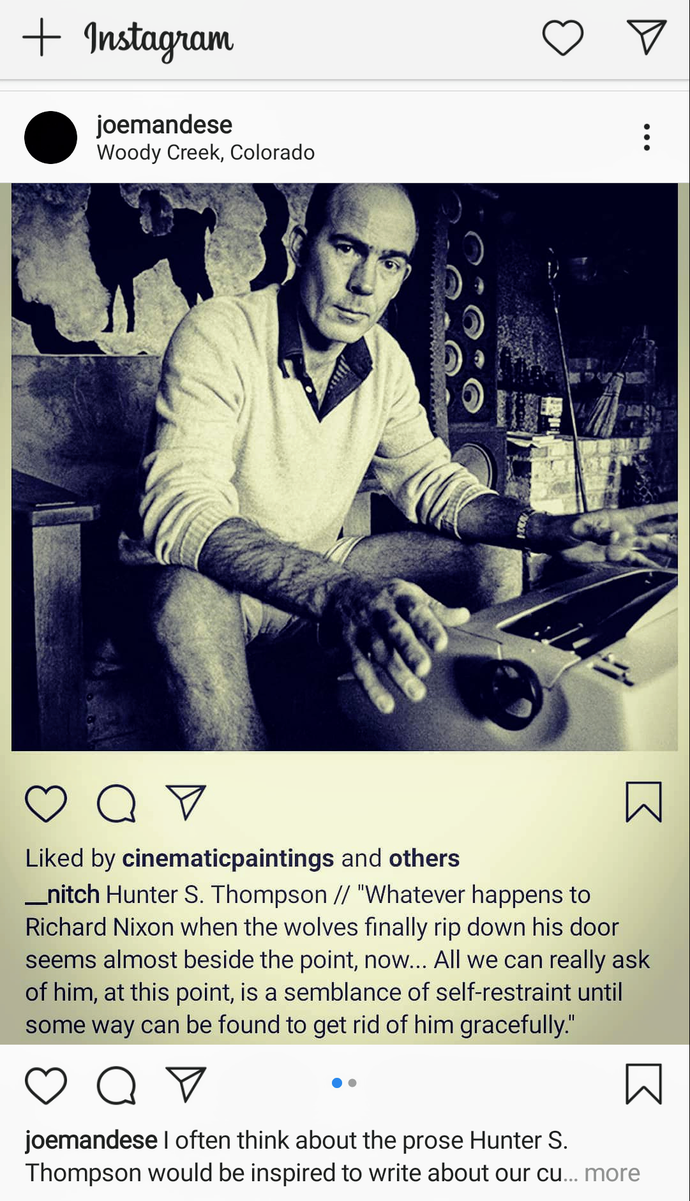 "Whatever happens to Donald Trump when the wolves finally rip down his door seems almost beside the point, now... All we can really ask of him, at this point, is a semblance of self-restraint until some way can be found to get rid of him gracefully."

That's the kind of prose I imagine Hunter S. Thompson banging out on the great IBM Selectric in the sky, so when I saw it in my Instagram feed this morning, I immediately began reposting it, replacing the current President's name for Nixon's, because I don't think anyone could capture the current American sentiment better.

Ironically, when I went to enter "Fear & Loathing" as the location, Instagram auto-filled Fox News HQ. Nuff said about that.

I know it may seem hard to believe, but I've been at a loss for words these past four years to say what I've been watching go on in America. And I think the reason is that, all my sarcasm aside, I'm a pretty literal guy and incapable of the kind of expression necessary to capture the moment.

For me, it's been four years of watching an accident happen in one continuous slow-motion moment. You know the way that goes, you can see it play out, but you can't respond fast enough to go into action and do anything about it until it has actually transpired. You feel stuck, frozen, incapable of the kind of action necessary in the moment.

That's what the current President has been for me: a four-year accident happening in stuck-in-your-place slow-motion.

I think the problem is that there is no literal prose appropriate to describe it, and I found it interesting that when Lawrence O'Donnell put together last night's segment on MSNBC, he acknowledged the same, which is why he chose to have a poet as his guest.

"When I watched that, I thought, White Supremacists have been standing back and standing by to ensure that White supremacy was the order of the day during American elections since this country began," author Caroline Randall Williams said of the President's dog whistling failure to condemn White Supremacists during his debate with Democratic challenger Joe Biden Tuesday night.

Okay, so that's a pretty literal reaction, too, but it just goes to prove how difficult it is even for a renowned poet to immediately evoke in words, and it made me think how much we need someone like Hunter S. Thompson to express what is truly going on, that a desperate, lawless President of the United States is sinking to new depths in order to create turmoil and chaos as his last ditch, Hail Mary pass to stay in power.

I can't count how many times I've said and/or written that we have entered the most dangerous moment in this presidency, but one of those times, I will be right.

One of the first things I posted on social media after he was elected was a video of the scene at the end of "White Heat" when James Cagney's character is standing on top of a burning building, screaming, "Made it, Ma! Top of the world!," because that's always how I've envisioned this President leaving office. His performance over the past four years, especially Tuesday night, has not convinced me otherwise.

By this point, I no longer blame the President for his actions. I blame those enabling him, especially the Republican leadership who have failed to fulfill their oath to protect and defend the Constitution and serve as a check against a clear and President (sic) danger.

If I may, I'd like to paraphrase HST one more time, borrowing from his obituary of Nixon.

"He has poisoned our water forever. Trump will be remembered as a classic case of a 'like, really smart, very stable genius' shitting in his own nest. But he also shit in our nests, and that was the crime that history will burn on his memory like a brand. By disgracing and degrading the Presidency of the United States, by fleeing the White House like a diseased cur, Donald Trump broke the heart of the American Dream."

8 comments about "Fear & Loathing On Top Of The World".
Check to receive email when comments are posted.
Read more comments >
Next story loading