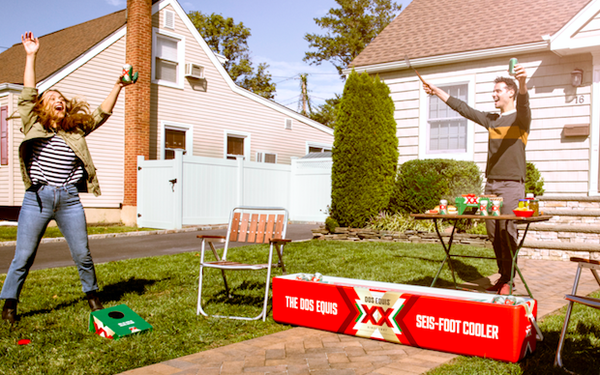 Dos Equis used to be the favorite beer of The Most Interesting Man in the World. But it’s wandered around thematically since the brand gave actor Jonathan Goldsmith, that suave Dos Equis spokesman, the boot in 2016. (He replanted with Astral Tequila.)

The brand seemed to have hit a nerve when in Juneit first offered its “Seis-foot Cooler” marketing promotion, giving away to a few dozen winners a strangely long beer cooler that doubles as a  built-in six-foot measuring tool for social distancing.

That contest giveaway was popular enough that the Mexican lager owned by Heineken is bringing it back, in its “Save Our Saturdays” promotion, along with a reprise of the “Dos-in-One grill pack.” That’s a single-use charcoal grill inside a box that transforms into a miniature cornhole game set. Party!!!

The beermaker says 205 drinkers who text S.O.S to 77000 and are randomly chosen will win those, subscriptions to CBS All Access, or discount coupons for beer. Some winners will have their beer cooler delivered in a souped-up Chevrolet El Camino emblazoned with the Dos Equis logo, right down to the hubcaps.

The promo takes off as the college football season pushes forward. The brand says “Save Our Saturdays” ads, voiced by familiar college play-by-play announcer Chris Fowler, will show up within at least four games this week.

The promotion plays off the idea of college football tailgate crowds. Marketing Daily asked if Dos Equis might pull back, after President Trump’s positive COVID-19 results may have made the idea of taking pandemic social interactions lightly seem tin-eared.

To the contrary, a spokeswoman said. “The call to ‘Save Our Saturdays’ is designed to ensure that college football fans are able to share a great  tailgate experience, no matter the time, place or status of this football season, in a safe manner,” she said.

“With stadiums limiting capacity or cancelng tailgating altogether, fans can still enjoy the traditions that make Saturday tailgates great whether that’s in your living room, in a park, a backyard, wherever you feel safe -- and the tailgate SOS gear provides fans that similar experience and enjoyment.”

Many colleges have banned tailgate get-togethers on campus, but that’s just led to new off-campus locales.

The trade website Brewbound in August reported Dos Equis’ plan to show off a new label, which first appeared last month, and said this is “the first step in a complete brand evolution that will affect all brand touch points.”