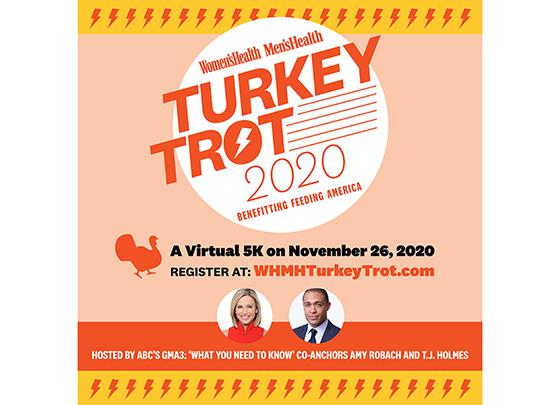 Hearst Magazines brands Women’s Health and Men’s Health are teaming up for their first nationwide virtual 5K race event to raise funds and awareness for hunger relief in America.

The "Women’s Health & Men’s Health Turkey Trot," which will take place on Thanksgiving Day, November 26, and benefit Feeding America, the largest hunger-relief organization in the U.S.

Wearable technology manufacturer Garmin has signed on as a program sponsor.

“Thanksgiving Day has grown to become the biggest running day of the year, with over 1 million Americans lacing up annually,” stated Men’s Health EIC Rich Dorment. “We’re excited to provide a virtual event and content platform that will inspire safe, socially-distanced fitness and philanthropy while shining a light on the growing problem of food insecurity in the United States.”

Co-anchors of the ABC News daytime program “GMA3: What You Need to Know” Amy Robach and T.J. Holmes will serve as official hosts of the Women’s Health & Men’s Health Turkey Trot.

Viewers and readers will have access to training plans, running content and tips for participating in virtual races this year. They will be distributed across Men’s Health and Women’s Health platforms, as well as on "GMA3."

Participants can register for free at WHMHTurkeyTrot.com, and run or walk a 5K course of their choosing on Thanksgiving Day. They can use their own tracking app to log mileage and time.

Upon registration, participants will be invited to make a donation to Feeding America, which provides food and groceries to more than 40 million people each year.

“As IRL races go virtual in response to the COVID-19 pandemic, we wanted to offer our audiences a way to continue their holiday traditions, or create new ones, while giving back on a national scale,” stated Women’s Health EIC Liz Plosser. “By joining us for a walk or a run this Thanksgiving, you’re not only doing good for your physical, mental and emotional health, but also for the community at-large.”

Women’s Health and Men’s Health will also each pack race bibs in 10,000 subscriber copies of the December 2020 issues, which will arrive in mailboxes mid-November.

Registered participants will also be able to download printable bibs to wear on November 26.

In addition, the first 500 registrants for the Women’s Health & Men’s Health Turkey Trot will receive a “Race in a Box” kit to commemorate the event.

According to Feeding America, food banks across the country have reported an average 60% increase in need for food assistance since the start of the pandemic.

It estimates that one in six people in the U.S. could face hunger this year as a result of COVID-19, up from one in nine in 2019.