Ad Review Panel: Glade's Lavender Scent May Not Be Better, But Lasts Longer 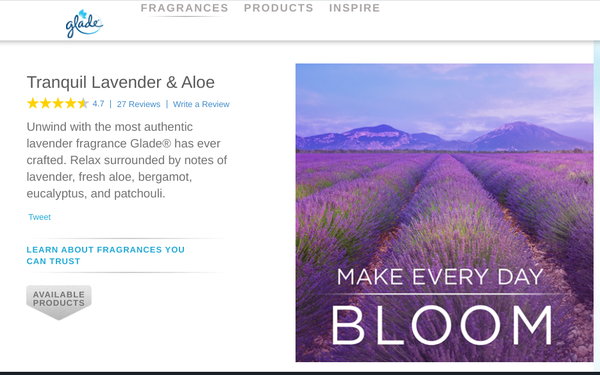 Glade’s lavender-scented warming air fresheners may not really smell any more like real lavender than the competitors’, but it appears they do last 50% longer than their previous versions.

That’s the conclusion of the National Advertising Division of BBB National Programs (NAD), responding to complaints lodged against SC Johnson’s Glade by one of its competitors, Reckitt Benckiser, LLC, the maker of Air Wick products.

Glade presented solid technical evidence its new version’s scent does last longer, according to the NAD.

NAD dismissed other complaints against Glade, chalking them up to standard ad puffery, while also recommending Glade tone down some language about its “authentic” lavender scents.

Air Wick objected to Glade’s claim that its air freshener  had been “redesigned for a superior fragrance experience.”  NAD thought that was okay “because the claim does not contain a provable, quantifiable attribute.”

But NAD asked SC Johnson to cut out some references in ads, such as one that says its Glade room fragrance has “more authentic lavender” than Air Wick, and to eliminate claims like it’s “the most adjustable air fragrance warmer” or “adjusts to any room size.”

SC Johnson said it would obey NAD’s advice -- but also said it thought its consumer testing made it pretty clear customers think Glade’s lavender scent is more authentic than the Air Wick brand.

NAD had concluded that a consumer panel deciding on authentic lavender fragrance would very likely be comparing Glade to the smell of lavender in other consumer products, not to real lavender.

The NAD is the ad industry’s self-regulating mechanism. Its rulings have no weight in law, but combatants often abide by NAD’s recommendations. A spokeswoman says it opens roughly 150 cases a year.

In the last couple of years, the NAD's been busy calling foul (or not) about ads from Verizon, AT&T and T-Mobile, objected to by one or more of those same companies, and other complaints about ads or claims from Comcast, Aldi, Unilever and beer advertising.

Proponents of complaining to NAD say it’s faster and cheaper, with far less red tape, than a lawsuit or complaint to a federal regulatory agency. And on the plus or minus side (depending on where you’re coming from), its rulings can have less consequence.

But if you lose with NAD, appealing through the legal or regulatory circuit is still possible.

Companies that don't participate or don’t agree to comply with NAD’s recommendations get referred to the Federal Trade Commission.  Through August, eight cases have been referred to the commission, the spokeswoman said.