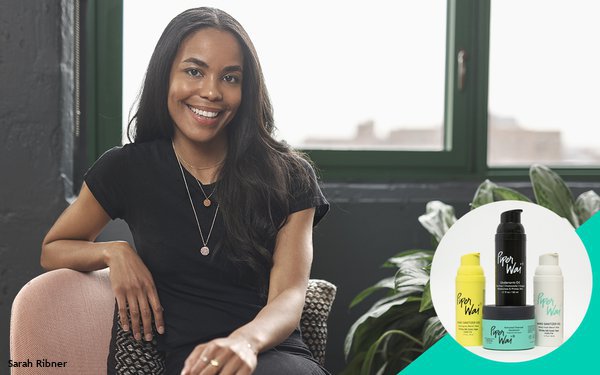 Driven by her own search for alternatives to mass-market, personal-care products, Sarah Ribner and a friend, Jess Edelstein, founded PiperWai in 2014 to sell a charcoal-infused deodorant.

The following year, they appeared on the program “Shark Tank.” While they did not close a deal as a result, they got a ton of public exposure—with increased sales leading to subsequent product extensions.

Now PiperWai (where Edelstein is no longer on staff) says it will become the first personal hygiene brand to fully use recycled ocean-waste plastic. To facilitate the switch, the company has launched a crowd-funding campaign through iFundwomen.

In this interview, Ribner talks about why all deodorants are not the same, and how PiperWai is chosing plastic recycled pulled from waterways as opposed to paper or glass.

CPG FYI: First off, what does PiperWai mean?

Ribner: Piper is named after a family dog, and Wai is inspired by where I was traveling and testing the deodorant when I decided to start the brand. [The Wai Wai are a tribe in Guyana.]

CPG FYI: Why did you start with a deodorant?

Ribner: I could not find a good, natural deodorant, so eventually I started using a DYI formula and decided I wanted to launch a brand around the formula.

There were a couple of mass-distributed brands that were really ineffective—made with cheaper ingredients—and smaller brands. But [there was] nothing on the mass level that was effective and good for all skin types, all genders and different dietary needs like vegan and gluten-free. Our formula fits all of these.

CPG FYI: How did you end up on “Shark Tank”?

Ribner: Because of the way we started—as a small brand, hand-crafting products and growing our community completely organically—we did not invest anything in advertising or marketing in the beginning. We wanted to partner with a shark to really help with distribution.

Actually, a family member sent me a link for a casting call. The NAACP was partnering with another organization called Values Partnership to source more diverse entrepreneurs. It turned out that they were looking for products like this.

CPG FYI: What was the impact of being on the show?

Ribner: We were back-ordered for almost half a year after that, because we kept getting [“Shark Tank”] reruns throughout 2016, update episodes and new episodes. We were constantly playing catch-up—going from having no infrastructure to grow, to all of a sudden having this national recognition and having to keep up with demand.

Ribner: It absorbs sweat and moisture, but it does not use heavy metals to clog your sweat glands, so you are still able to sweat.

Ribner: A typical antiperspirant or deodorant is not necessarily working with your body to neutralize odor. It’s really just masking it, killing off bacteria and clogging sweat glands.

Among the most common [ingredients] are aluminum compounds. That's actually what’s clogging your sweat glands and preventing sweat from coming out. You can’t just wash it out. Once it’s in your body, it can stay there for quite a few days.

CPG FYI: How do you source ocean-waste plastic?

Ribner: The suppliers we work with go out and physically collect discarded plastic. It could either be in the ocean or on coastlines or waterways that feed into major oceans. Once it’s collected, it’s sent to a facility for sorting and cleaning. Then they grind it down into little granules, and it is reconfigured into high-quality packaging.

CPG FYI: Why is plastic a better choice than other packaging options?

Ribner: We looked at bio-plastics and paper, along with glass—which is what we currently use. It was about eight months of research and talking to suppliers, sustainability thought leaders and nonprofits active in various industries.

What we determined is that paper may seem like a great solution upfront. But when you get to the start of life, when it’s first manufactured, it’s using much more water in production. It’s also contributing to deforestation.

CPG FYI: Why did you choose iFundwomen to fund the packaging transition?

Ribner: Because there’s so much information that we have to get out. We wanted something where we could explain from start to finish what the process looks like with recycled ocean plastics. It’s also a platform that, when you donate to one campaign, a percentage of that also gets reinvested into other women-owned businesses on the platform.