Lost In The Supermarket? On TV, This Is Not The Case 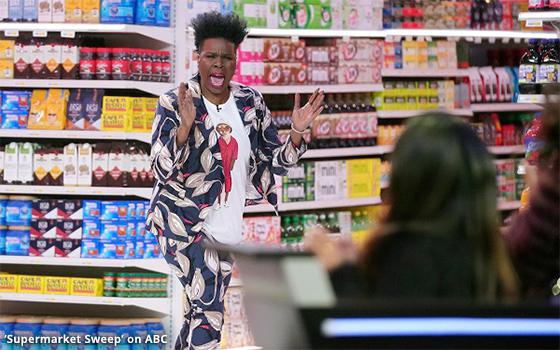 A groundswell of interest in a revival of the old “Supermarket Sweep” shopping-aisle game show was easy to miss because there was none.

Nevertheless, the spectacle of contestants running pell-mell through a grocery store plucking items off the shelves returns to TV Sunday night on ABC -- in prime time, no less.

This new version of the show is hosted by comedian and former “Saturday Night Live” cast member Leslie Jones (pictured above), who also gets an executive producer credit.

The 1990s version can now be seen on Buzzr, the channel that airs vintage game shows. Buzzr is owned by Fremantle, which owns a number of old game shows and produces new ones for the networks.

Buzzr has old versions of “Match Game,” “Family Feud,” “To Tell the Truth” and “Card Sharks” -- all of which have been revived in some form or another on ABC, produced by Fremantle.

The new “Supermarket Sweep” is also produced by Fremantle. For Fremantle, business is good.

Although we still have supermarkets today (because, after all, everybody’ gotta eat, right?), they have evolved. Currently, we visit the supermarket armed with pocket-sized bottles of sanitizer, and wearing masks.

Once inside, we try our best to keep six feet away from other shoppers in aisles that are decidedly not six feet wide.

And if anyone is running through the aisles of supermarkets today, it is for the purpose of getting out of the store as fast as possible.

On “Supermarket Sweep,” however, the challenge is to beat the clock by compiling a collection of items in a grocery cart whose value adds up to, or is close to, a certain sum.

The show depends, at least in part, on the contestants’ knowledge of supermarket prices. Another traditionally daytime show that depended on this area of domestic expertise (and still does) was “The Price Is Right.”

Both shows -- “Supermarket Sweep” and “The Price Is Right” (seen weekday mornings on CBS) -- represent opportunities for supermarket brands to get exposure within the shows, if the price is right, of course.

As a venue for TV shows, supermarkets are already getting considerable exposure of their own on TV these days.

Most notably, “Guy’s Grocery Games” on Food Network -- hosted by the tireless Guy Fieri -- has chefs racing through a supermarket to collect a list of ingredients that they then use in an on-the-spot cooking competition.

Not to be outdone, the four jokers of “Impractical Jokers” on TruTV are often seen in New York area supermarkets such as Fairway where they film a variety of hidden-camera comedy bits with unsuspecting customers.

This might even be true today for those of us who are still shopping for our groceries in person during the current pandemic.

But on TV, game show contestants are shopping happily indeed, with hopes of finding a pot of gold at the end of aisle 8.