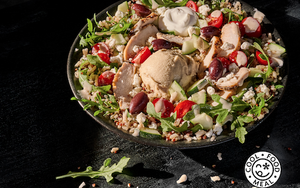 Starting today, labeling 55% of Panera Bread menu items as “cool food meals” has nothing to do with hipness — and everything to do with trying to curtail climate change.

Panera says it’s the first national restaurant chain to label the carbon footprint of its meals based on guidelines from the World Resources Institute (WRI).

“We have two objectives,” Panera CEO Niren Chaudhary tells Marketing Daily. “One is to build general awareness and make it really easy for the customers for whom it matters. It’s not for everybody. We understand that. But for whomever it matters, making it very easy that by choosing their food, they can have a positive impact on climate change.”

The underlying statistic is that food production “contributes to at least 25% of greenhouse gas emissions,” Chaudhary adds.

WRI is a nonprofit organization that works in more than 60 countries to solve global issues related to water, forests, climate, energy, food, cities and transport, as explained in this video.

Panera is partnering with WRI and the Pure Strategies sustainability consultancy to calculate the carbon footprint of each ingredient in a meal and determine which meals can be certified as climate-friendly, “cool food meals.”

There is no direct correlation between calorie counts and a meal’s carbon footprint.

“This is not about sacrificing taste or whatever you want to indulge in. Broccoli cheddar soup is right up there in terms of a low carbon footprint,” says Chaudhary.

On a carbon footprint scale, greens and vegetables score lower than dairy and animals.

“Poultry has a lower impact when it comes to carbon footprint protein versus things on the higher end of the scale like beef and lamb, which have a significantly higher carbon footprint per portion,” says Sara Burnett, Panera’s vice president of food values, sustainability and public affairs.

Meanwhile, PepsiCo provided an update yesterday on its $1 billion “Green Bond” global initiative to create a more sustainable food system. The company said it has committed $447 million of the $1 billion to items like recycled plastic, low-carbon-emitting vehicles and more water-efficient manufacturing plants.

On Oct. 9, 2019, PepsiCo  issued its first “Green Bond” in the amount of $1 billion to help fund a more sustainable food system in three areas: packaging, de-carbonization and water.

In yesterday’s update, the company said that by the end of 2019 it had allocated approximately $200 million to procure recycled polyethylene terephthalate plastic for its North American beverage packaging.

“While confusion and frustration are growing facets of recycling, social and cultural concern for single-use plastic has exploded as a consumer issue,” says David Wright, senior marketing manager at research provider The Hartman Group.

“When interviewing millennials during the qualitative phase of our Sustainability 2019 research, there was a palpable sense of fear and apprehension in their responses.”

Other PepsiCo allocations include more than $110 million to help transition the company-owned vehicles to lower-carbon models; $98 million to build a green R&D facility in Valhalla, New York featuring 681 solar panels; and $9 million to improve water-use efficiency in its plants.