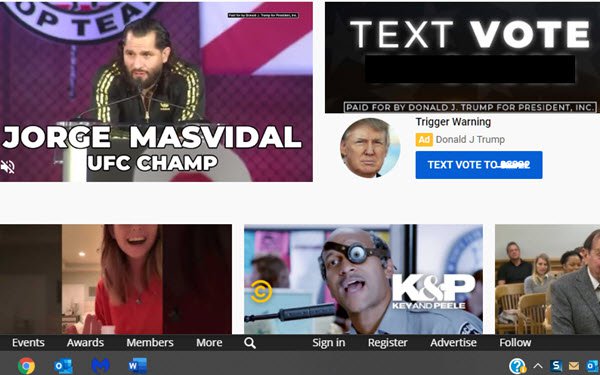 In another example of what many would call too little, too late by social media platform owners, Google — which let the Trump campaign reserve YouTube’s masthead ad position for the entire Election Day — has decided to drop the all-day-takeover option starting next year.

YouTube’s policies have been updated to “retire” reservations for full-day ads in the video platform’s coveted homepage masthead position for all advertisers, in all circumstances, not just around elections or political ads, Google confirmed to CNBC.

The new policy requires the masthead slot to be purchased on a per-impression basis, making it “harder” for one advertiser to dominate it for a full day, according to the report.

Google said it told advertisers about the coming policy change earlier this year.

The news about Trump’s Election Day takeover of the masthead broke in February. The price wasn’t disclosed, but the New York Times has estimated it costs about $2 million per day.

“For years, advertisers asked us for more flexible options for appearing in the YouTube masthead, which is why we introduced the cost-per-thousand (CPM) Masthead in 2019 and earlier this year told advertisers that it would be our primary masthead reservation option in 2021,” the company said in a statement. “This change gives advertisers more budget flexibility and applies across all verticals -- not just political advertisers.”

In September, Google, now being sued on anticompetitive practices grounds by the U.S. Department of Justice, announced that it will suspend political advertising after the polls close on November 3, to allow for counts to be completed and official results certified. Facebook soon followed Google’s example.