'Roadkill' A 'Masterpiece'? Keep Calm And Carrion On 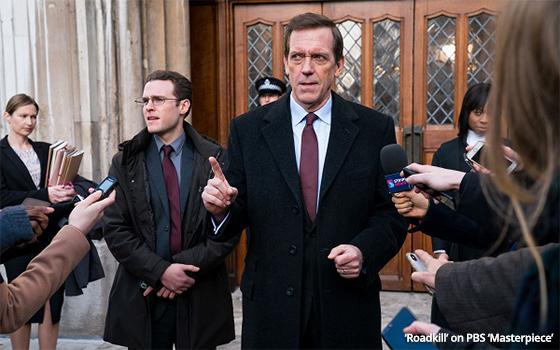 Just because a TV show has an English accent does not make it a masterpiece.

And yet, PBS persists in labeling its Sunday-night shows as masterpieces in the long-running series that was once known as “Masterpiece Theatre,” but some time ago was shortened to just “Masterpiece” (correctly pronounced “MAH-ster-piece”).

While some of the shows imported from the U.K. for “Masterpiece” are fine TV shows, few if any of them have emerged as bona fide masterpieces recently.

One could almost conclude that there has not really been an authentic masterpiece on “Masterpiece” since “Downton Abbey” ended its run on PBS in March 2016.

For the most part, the British-made shows that turn up on “Masterpiece” are perfectly serviceable TV shows that are produced with more or less the same high quality of production as many mainstream American-made TV shows.

But they are not masterpieces. Think about this: If an English TV network started importing American drama series such as “Law & Order: SVU” or the Dick Wolf “Chicago” shows on NBC or “The Good Doctor” on ABC and presenting them in an ongoing series titled “Masterpiece,” we Americans would marvel at the gullibility of English TV viewers.

There is nothing particularly wrong with these American dramas, but masterpieces they are not.

A current British-made series now airing on “Masterpiece” provides a case in point. The show, titled “Roadkill,” settled in last Sunday for a four-episode, four-week run on PBS stations.

The show is about an outspoken, conservative member of Britain's ruling class who has built a base of popularity among the country's traditional working- and middle- classes by speaking to them directly, and addressing their concerns, on a popular radio show.

However, the wily, hard-nosed prime minister, Dawn Ellison (Helen McCrory), aims to stay a few steps ahead of him, and deny him the power he seeks, since it conflicts with her own.

So, she and various supporters have unleashed a clandestine effort to dig up a formidable pile of dirt on Minister Laurence that would likely spell the end of Laurence's political ambitions, and possibly his career.

If the secrets are scandalous enough, Minister Laurence and his career would both become “roadkill,” a word positioned in the show as having this particular political meaning. Hence, the show's title.

As we learned in Episode One last weekend, the randy transportation minister has plenty of juicy skeletons in his closet, and they are about to be made public. Can he and his career (not to mention his family life) withstand the firestorm that is sure to come? That is the question.

For those who go in for this sort of thing, “Roadkill” provides plenty of entertainment, even if it falls short of “Masterpiece” status.

england, television
1 comment about "'Roadkill' A 'Masterpiece'? Keep Calm And Carrion On".
Check to receive email when comments are posted.
Next story loading