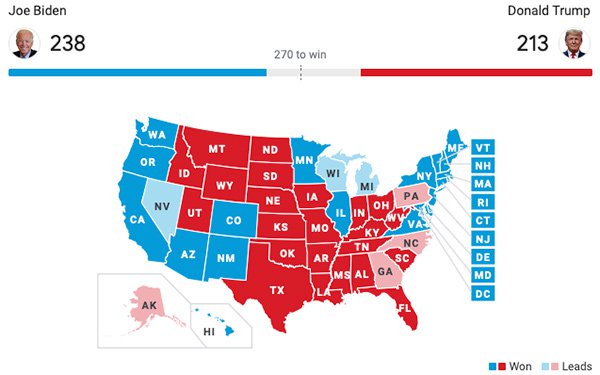 Fair and impartial -- that's my view when it comes to covering the news. Don't take words that were said or written out of context -- and if there are two sides, give equal time to each in a fair and meaningful way.

Early in my career, I wanted to be a news reporter, but chose to work as a graphic artist first, because of the daunting responsibility of being fair, impartial and getting all aspects of the news being reported absolutely correct. Since 2000, I have approached it head on. It is equally important for media platforms to take on that same responsibility.

Google did a pretty good job of being the first to surface real-time election results from The Associated Press in search engine results, stating the facts and suggesting those states that were still in play and those predicted to go either to Biden or Trump. That was not the case with Facebook, Twitter and YouTube.

Overall, social media did a poor job of handling premature claims during the U.S. presidential election on election night and into the following day.

While YouTube allowed several channels to broadcast fake election results hours before any state’s polls closed, Facebook and Twitter allowed some claims of victory for the U.S. presidential election, although they had said they would not.

Democratic Presidential candidate Joe Biden on election night said during a speech he’s “on track” to win the 2020 election, yet numbers are still being tallied in key battleground states at the time of writing this column, many of which favor Trump. So that comment is a prediction and not a fact.

While Biden expressed a sentiment that sounded optimistic about winning (closing remarks from Biden: "Keep the faith, guys, we’re going to win this."), Twitter did nothing. But when Donald Trump tweeted: “We are up BIG, but they are trying to STEAL the Election. We will never let them do it. Votes cannot be cast after the Polls are closed!” Twitter blocked Trump’s tweet for being offensive and accusatory.
The label read: "Some of all of the content shared in this tweet is disputed and might be misleading about an election or other civic process." Most media outlets interpreted Trump’s statement as claiming victory while he also stated that his opponent is “trying to steal the election.”

The Donald Trump campaign claims that tech giants continue to censor and silence the president's tweets. Biden’s tweets have not been hidden from view.

Neither Biden nor Trump has won the 270 Electoral College votes needed to seal the race. There’s still a lot of counting to do. Pennsylvania, for example, has stopped counting, saying workers need more time to tally votes -- especially in Philadelphia and Pittsburgh, where there are many in-person and mail-in ballots to be counted.

The flood of misinformation and misconstrued information is daunting. Despite slow vote counts in some states and the need to halt vote counts in others that are delaying final results, Google’s maps show Trump is favored to take Georgia, Michigan, North Carolina, and Pennsylvania. With 64% of the voting reported and counting stopped, Trump holds 55.7% of the votes and Biden holds 43.1% in the state of Pennsylvania at the time of writing this column.

On YouTube on election night, The Insider reported that the video site streamed fake election results to tens of thousands of people.