American Dreams Are Alive And Well On 'Bob Hearts Abishola' 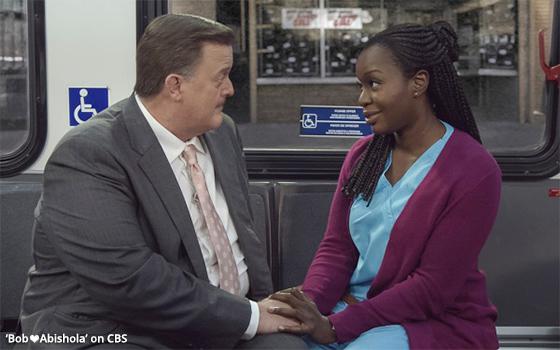 At first glance, Billy Gardell might not seem like the romantic leading-man type, but he has emerged nevertheless as TV's top romantic comedy star.

For six seasons, he romanced Melissa McCarthy in “Mike & Molly.” And now he is courting an immigrant from Nigeria in “Bob ♥ Abishola,” also on CBS and emanating from the sitcom factory of producer Chuck Lorre.

Where CBS's other Monday night comedy, “The Neighborhood,” deals with interracial relations between White and African-American neighbors, “Bob ♥ Abishola” covers race relations from another angle.

In this show, race and immigration are the themes. And even though these issues have been tailored and simplified for a mainstream network-television audience, the show puts a hopeful, positive spin on the immigration experience that feels refreshing for TV.

One could even go so far as to say that “Bob ♥ Abishola” might be the most celebratory, America-positive TV show currently on the air, although that is certainly a lot of responsibility to pin on a prime-time sitcom.

But consider the facts. The Bob character played by Gardell (seen with co-star Folake Olowofoyeku -- “Abishola” -- in the photo above) is a successful, middle-aged, 100% American entrepreneur who owns a sock-manufacturing company who last season fell unexpectedly in love with this Nigerian immigrant.

In the best tradition of the American spirit, he is completely open-minded and unhesitant about his relationship with this woman whose background, race, culture and ethnicity are nothing like his own.

For her part, she is a successful immigrant who works as a nurse in a local hospital (where they met last season when he had a heart attack). She loves Bob too.

Abishola comes from a loving family who have also emigrated from Nigeria to America and by all appearances are sharing gladly and gratefully in the American dream.

The modern American society represented by this show's characters reflects the multicultural U.S.A. we are all living in now.

It shows a side of the immigration experience that is often underrepresented on TV -- namely, that for many immigrants from all over the world, the transition to American society and life is often a successful one.

And the vast majority of Americans are glad they are here because most Americans understand that this is what America is about. It is a place populated by people from elsewhere who have come here in search of a better life, and are often finding it too.

For his part, Bob the American of “Bob ♥ Abishola” has a dream too. He dreams of love, and he has found it with someone he never expected.

As the new season begins, Bob seeks to become engaged to Abishola. But unbeknownst to him, Nigerians have a number of traditions -- i.e., hurdles -- by which members of Abishola's extended family in Nigeria will have to approve of the marriage before it can happen.

This situation presents tantalizing possibilities for the new season as Bob and Abishola may be seen traveling to Africa to seek the approval of Abishola's relatives.

How much do you want to bet that in the end, love wins?