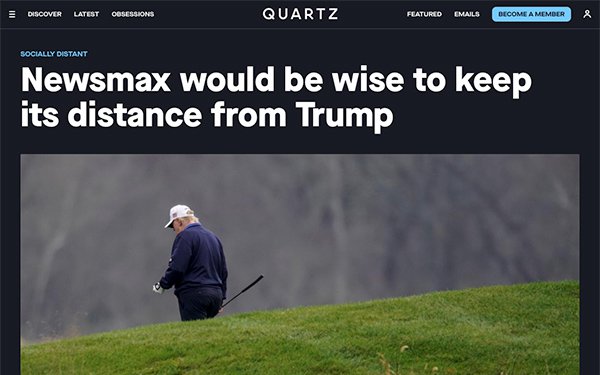 Digital business publication Quartzsays it had a record week for member signups after Japanese financial data company Uzabase announced it had sold the publisher to cofounder-CEO Zach Seward.

It added nearly 1,200 new members after the news reported it was becoming an independent media company.

Uzabase estimated it would see $1.9 million in subscription revenue this year from Quartz.

Editor-in-chief Katherine Bell will become a minority owner in the company; she and Seward will take Quartz private. The rest of Quartz’s staff will share equity in the new company.

In a letter to readers last week, Seward explained how Quartz would refocus on the company’s mission: "Make business better."

“We believe companies should solve real problems without creating new ones. The global economy must be as inclusive as it is innovative, balance financial incentives with the needs of our planet, and elevate leaders who act with integrity, empathy and foresight,” he wrote.

Last week, Quartz hosted “Members Week” to celebrate two years since it launched its membership offering. It came with perks and activities for existing members. To drive new ones, it included 50% off the first year of membership, sent gifts to randomly selected members with a Quartz tote bag, postcard, sticker and handwritten note.

Quartz also hosted a Q&A with executive editor Kira Bindrim and editor in chief Katherine Bell and an AMA (“Ask Me Anything”) session based on Anne Quito's recent field guide “Happy Home Office.”