On HBO Max, The Case Of The Drunk Flight Attendant 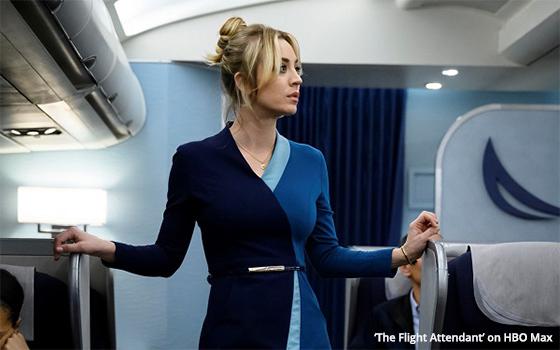 Another day, another TV drama about a main character who is a hard-partying train wreck.

In this one -- titled “The Flight Attendant” and premiering on the HBO Max streaming service on Thanksgiving Day -- the character of the title is an airline crew member who also happens to be addicted to sex and alcohol.

For the first 11 minutes of the series premiere, her good-time-girl lifestyle is portrayed as a harmless lark, as if alcoholism is something to be treated lightly.

But then, disaster strikes when the man she met on a flight to Bangkok turns up dead in bed next to her. He evidently had his throat cut some time in the night, presumably sometime after she passed out from drinking with him all evening.

At this point, when the hung-over, formerly stewed stewardess named Cassie wakes up and sees this man’s bloody corpse, the show morphs into an international thriller as she rushes to catch the next plane out of Thailand and a hotel housekeeper comes upon this man’s corpse a few hours later.

In a sign that even HBO Max cannot quite position this series, the streaming service’s press material covers all the bases, describing this “limited” series as a “dark comedic thriller.”

The phrase is ridiculous since there is nothing remotely comedic or comic about this show. A man has had his throat cut. The show is, therefore, a whodunit, otherwise known as a murder mystery.

As such, it is very good. It is certainly mysterious. Basically, because of this woman’s alcoholism, she has no idea what happened that night, although she is reasonably certain she did not do it.

We, the audience, do not know that, however. Nor do we know much else about the crime or the man who was murdered by the time Episode One comes to a close. The show reveals its relevant details slowly, gradually, artfully and, above all, suspensefully.

As anyone knows who has encountered the ubiquitous promotion campaign for this series (especially in New York where it is the subject of copious outdoor advertising), the star of this show is Kaley Cuoco, last seen in “The Big Bang Theory.”

Based on that credit alone, Cuoco, 34, has more than earned her way upward to headliner status. She is perfectly cast here as a swinging flight attendant on the run. She wears the role like a tailor-made glove.

Fans of “Mad Men” take note: In this show’s animated opening title sequence, our flight attendant heroine is seen in silhouette falling slowly from some great height. If this is supposed to be an homage to “Mad Men,” the connection between that show and “The Flight Attendant” remains elusive.

digital, hbo, streaming
2 comments about "On HBO Max, The Case Of The Drunk Flight Attendant".
Check to receive email when comments are posted.
Read more comments >
Next story loading