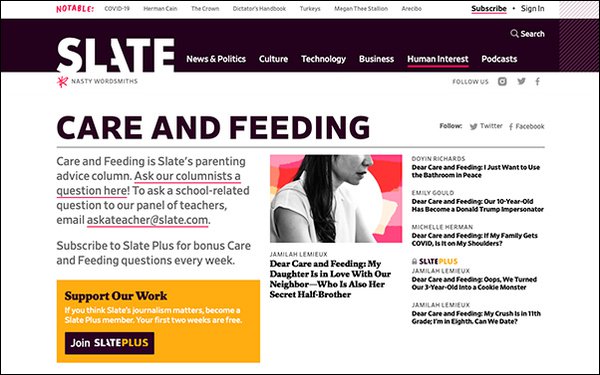 Since the start of 2019, the “Care and Feeding” column has experienced a 148% increase in total engaged minutes and 142% increase in unique visitors, according to the digital media company.

The parenting columns went from publishing three times a week on average, to every day in June 2019.

“The success of the column has opened up a slot in our roster to make more hires to expand it,” Laura Bennett, cofounder of "Care and Feeding" and Slate’s editorial director, told Publishers Daily. “We have brought more people into the fold, because readership has been so loyal and so fervent — we wanted to meet that demand.”

Nicole Chung, Emily Gould and Doyin Richards are joining Jamilah Lemieux and Michelle Herman in an effort to bring new and diverse perspectives to the column.

Chung, for example, is of Korean ethnicity and raised by a White family. Gould is from a Jewish family.

“I’m not only a dad, I’m a Black dad. To share my unique perspective on parenting as a Black man with such a diverse group of readers is extremely exciting for me,” Richards stated.

"Care and Feeding" answers readers’ parenting questions, on issues like how to parent during a pandemic, bullying, co-parenting and daycare.

Chung has contributed to Slate since 2013, and is the author of “All You Can Ever Know.” She is the editor in chief of Catapult magazine, co-editor of the anthology “A Map Is Only One Story,” and former managing editor of The Toast.

Gould is the author of the novels “Perfect Tunes” and “Friendship,” and the memoir “And the Heart Says Whatever.” She also co-owns the independent bookstore Emily Books.

Richards is an author, keynote speaker and founder of the Anti-Racism Fight Club.

“We are casting the best people we can find — but as a group, we think about how these perspectives compliment each other. Diversity is so important,” Bennett said.

The "Care and Feeding" column has driven thousands of readers to become paying members since Slate launched a paywall in April.

Slate’s suite of advice columns experienced more than 96% growth in total engaged minutes and 156% growth in unique visitors in the past two years, according to the company.

"Care and Feeding" is supported by Slate’s other parenting content, including the “Mom and Dad Are Fighting” podcast, which launched at the end of 2013.

When "Care and Feeding" was created, Bennett says there was a lack of parenting websites that could offer what the column could: a “frank, hilarious, clear-eyed, real talk” perspective, one that is “not solely targeted toward one gender, but is equally enlightening, urgent and funny."

All three new writers offer “a diversity of perspectives, humor, warmth and moral clarity,” Bennett said. She also praised the column for “how well it’s adapted to the newly complicated and mystifying world of parenting that we all find ourselves in right now.” Issues like screen time, time with other kids and remote schooling are at the forefront of many parents' minds during the pandemic.