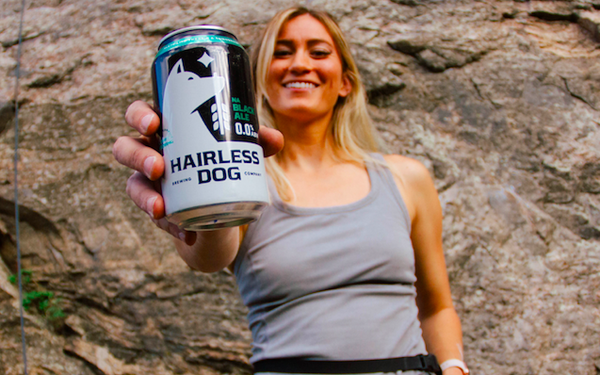 The holiday season is a special time for beer marketers -- which could mean a correspondingly big time for marketers on the other side of that coin, too.

Minneapolis-based Hairless Dog Brewing, which has been making non-alcoholic craft beer since 2018, is  pitching its Limited Edition Holiday Gift Box as an alternative to "excessive alcohol consumption on the rise during the pandemic."

The company noted that  even the Centers for Disease Control and Prevention recommends Americans refrain from drinking during the holidays.

Officially, the CDC is saying, “Use of alcohol or drugs may alter judgment and make it more difficult to practice COVID-19 safety measures.” Its guidance doesn’t go further than that.

Still, it’s not news that alcohol and the holidays don’t always mix well, from drunk driving accidents to domestic violence or worse.

The Limited Edition Holiday Gift Box, priced at $50, aids the recipient's on-the-wagon efforts with three six-packs of each of the four types of Hairless Dog non-alcoholic brews, a beanie and a T-shirt emblazoned with the brand’s logo, and two koozies (those spongy beer-can holders that are often giveaways).

It’s been popular enough that the gift box is temporarily sold out, probably until this week. (No beanies, but they’re on order.)

The Sober Curious movement has been growing for years, and so have  the number of low-alcohol or no-alcohol beers. in a few weeks, Dry January begins, a big month for people who either want to quit drinking altogether or balance out the alcohol damage they did during the holidays.

Marketers want to be prepared, and in fact Hairless Dog’s gift package is not green, red and snow-flecked -- because it’s looking toward gift-giving in the month of rampant sobriety just ahead. Last year one survey said 23% of Americans planned to participate in Dry January.

Though growing rapidly, purchases of non-alcoholic beer represented just .37% of all beer sales in 2019, reports IRI.

Most non-alcoholic beers have had alcohol removed during the distillation process. Hairless Dog is producing a beer that never, ever, had alcohol, which it says makes it “the first 0.0% craft beer in the country.” Part of its pitch is to pregnant women and first responders.

It’s now available in 20 states, many of them through an association with the Total Wine beverage store chain.

One of the other best-known non-alcoholic craft beer companies is Athlete Brewing Co., based in Stratford, Connecticut, which produces some well-reviewed non-alcoholic beers, and offers a successful subscription plan.  The alcohol gets out during the fermenting process, leaving its products with less than 0.5% alcohol-by-volume, which is essentially non-alcoholic.

Other big time brewers have entered the game. Heineken introduced 0.0 in 2019 and spent a reported $50 million marketing it. Budweiser Zero was introduced at the end of July with a big ad campaign.

There’s more to come as the rush of seltzer -- hard and otherwise -- are prompting consumers to look around for alternatives. In addition, the new non-alcoholic beers are generally higher priced, targeted to upscale consumers.

Lagunitas, one of the most established craft brewers, is expected to announce its own new non-alcoholic IPA next week.

Hairless Dog co-founders Jeff Hollander and Paul Pirner came together after both discovered that, as they got older and took on more responsibilities, drinking at parties just didn’t fit in so well. They worked on the recipes for Hairless Dog beer, which began proclaiming, “Party like there’s a tomorrow.”

But for Jeff Stevens, the founder of new non-alcoholic beer brand Wellbeing Brewing in St. Louis, launching his brew was more remedial: “Years ago, I quit drinking alcohol,” he writes on the company’s website. “It was pretty obvious at that moment of clarity that booze and I were never going to have a successful relationship.”