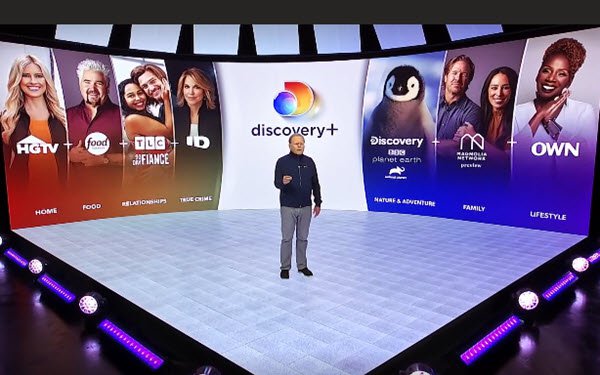 Discovery Inc.’s long-awaited reveal of its global streaming platform, Discovery+, on Wednesday, offered some intriguing elements, including a hybrid model in the U.S., a partnership with Verizon, an Olympics deal in Europe  — and ambitious projections calling for the new SVOD to ultimately reach 70 million users in the U.S. and 300 million globally.

In the U.S., the platform — set to launch on January 4 — will have what Discovery President/CEO David Zaslav (above) called an “ad lite” version priced at $4.99 per month, as well as an ad-free version for $6.99 per month.

Advertisers will have eventually have access to data-driven/addressable targeting, and the company asserted that Discovery+ will bring in three times the ad revenue of its linear TV networks, even with just five minutes per hour of ads in the "lite" version. Advertising partners at launch will include Boston Beer Company, Kraft Heinz, Lowe’s and Toyota.

Other new series will feature Sir David Attenborough, David Schwimmer, Amy Schumer, Will Packer and Kevin Hart, Bobby Flay and Giada De Laurentiis, and Sebastian Maniscalco, among others. The hugely popular “90 Day Fiancé” franchise is being expanded with a host of spinoffs, including game and talk-show formats.

Discovery+’s international rollout, to reach 25 countries in 2021, began last month in the U.K. and Ireland — where Discovery has a distribution deal with Sky TV — and will continue with India, the Nordics, Italy and the Netherlands. Zaslav announced another new European distribution partnership, with Italy's TIM. Discovery’s existing media assets currently reach 220 countries and territories and span nearly 50 languages.

Discovery+ will be the “streaming home” of the Olympic Games in Europe (Russia excluded), with its Eurosport network (based on offering locally relevant sports) designated as an official broadcaster in France and the U.K. during 2020.

“We have been working methodically the past two years to bring all of our strategic advantages to the launch of Discovery+, including distribution and advertising partnerships around the world, a world-class offering of quality brands, authentic personalities and the largest content library at launch, as well as a broad slate of exclusive programming,” summed up Zaslav. “With Discovery+, we are seizing the global opportunity to be the world’s definitive product for unscripted storytelling, providing households and mobile consumers a distinct, clear and differentiated offering across valuable and enduring lifestyle, and real-life verticals. We believe Discovery+ is the perfect complement to every streaming portfolio, and we couldn’t be more excited to partner with Verizon to bring this incredible content to their customer base."

* In another new content partnership, Discovery+ will for the first time bring together non-fiction content from A&E, The History Channel and Lifetime with the Discovery brand portfolio. The SVOD will offer more than 1,500 episodes from A&E Networks series such as “The First 48,” “Bring It,” “Ice Road Truckers,” “Pawn Stars,” Ancient Aliens” and “Storage Wars.”

* The streamer’s nature and environmental programming will include exclusive access to the BBC’s largest natural history offering, including “The Mating Game,” “Planet Earth” and “Blue Planet,” and content from digital-first brand The Dodo. Discovery+ will also feature content partnerships top environmental organizations.