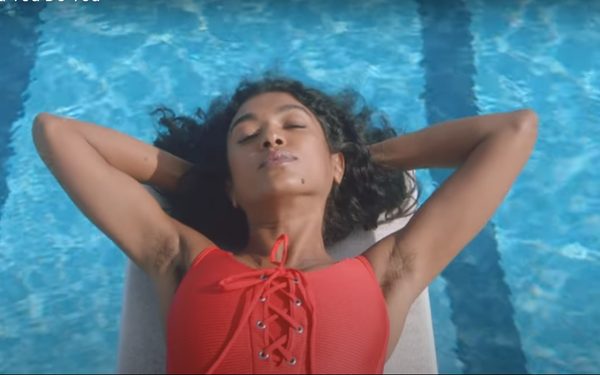 Counterintuitive marketing: A Billie's campaign encouraged women to feel free not to shave underarms for swimming.
If the Federal Trade Commission has its way, the makers of Billie razors for women won’t be acquired by Procter & Gamble’s Gillette division.

The commission authorized a suit in federal court to block the acquisition of the  company that began selling women’s razors and body care products in November 2017.

Billie actually markets itself as positioned against the so-called “pink tax” by which women are charged more for the same product than a man is. In this case, the prime collector of that surcharge is Gillette’s razor brand for women, called Venus.

The complaint alleges that the proposed acquisition  “would allow P&G, the market-leading supplier of both women’s and men’s wet shave razors, to buy Billie, a newer but expanding maker of women’s razors, and thereby eliminate growing competition that benefits consumers.”

It’s the second time this year the FTC has stopped a long-established razor brand from snapping up a new market entrant. In February, the FTC filed suit to block Edgewell Personal Care, the maker of Schick razors, from its planned $1.3 billion acquisition of  Harry’s, the D2C razor business that began in 2013. The FTC cited basically the same reason it opposes P&G’s acquisition of Billie.

“We were disappointed by the FTC’s decision. We are considering our options in light of the decision and do not have any further comments at this time,” a company spokeswoman told Marketing Daily. The administrative trial will begin in June, unless Procter & Gamble drops the matter altogether.

“Billie saw an opportunity to challenge P&G’s position as the market leader by finding underserved, price and quality conscious customers, and building an innovative brand,” said Ian Conner, director of the FTC’s Bureau of Competition. “As its sales grew, Billie was likely to expand into brick-and-mortar stores, posing a serious threat to P&G. If P&G can snuff out Billie’s rapid competitive growth, consumers will likely face higher prices.”

Dollar Shave Club, which invented the D2C shave category in 2011, sold itself in 2016 to Unilever for $1 billion, a price tag critics thought was too rich.

But as the Swiss online business education site IMD’s Michael Wade wrote at the time, the razor blade business is “the closest thing to an annuity that exists in business. Unwanted hair stubbornly grows through all business cycles.”

While hair still grows that way, what people do about it is changing. Men are shaving less frequently and beards are hipper, and so acquiring other brands to amass as much business as possible is appealing.

Gillette has over 50% of the market -- but a decade ago, it was 70% -- and Edgewell, which owns Wilkinson Sword as well as Schick, takes a lot of what’s left. Both have been hurt  by Harry’s and Dollar Shave Club.

Billie is a lot hipper than Venus, by most accounts, and last year raised some eyebrows with its “Red, White and You Do You” campaign encouraging women to feel free not to shave underarms, legs and pubic hair when they’re going to the beach, if that was their desire.

That wouldn’t seem to sell as many razors, but, like other online retailers, Billie appeals to a younger demographic that wants products reflecting a strong point of view, a sense of community and a bit of honesty. Billie made news in 2018 when it produced an ad that just showed a woman actually shaving hair off her leg. Usually in ads, women shave legs  that look like they’ve already been shaved.

Billie offers cash back for each new customer a subscriber brings in, but, in a slap to the consumer packaged goods industry, it pointedly calls that its Pink Tax Rebate.

The $9 Billie “starter kit” includes the Billie handle, a magnetic holder for the shower and two refill blades. After that, a package of four refill blades costs $9.