For Coors Light, B.Y.O.B Now Means Build Your Own 'Beerman' 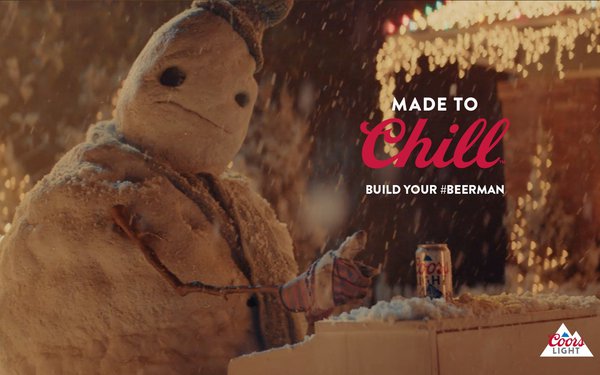 There are snowmen. And there is Coors Light's Beerman, a strange snow-based fellow who is now showing up in a holiday commercial rolling out this week. This guy seems different enough to create some buzz.

“Beerman is the holiday hero we need this year,” says Chris Steele, Coors Light’s North American director of activation, in a company blog.. “He is perfectly imperfect. He’s hastily put together. He’s slightly worse for wear from 2020, but you can see there’s a tremendous amount of joy lurking just below his snow-clad surface, and he’s sharing that with his neighbors.”

A spokeswoman further explained to Marketing Daily,“We had two goals in mind. First, we wanted to make it clear that Beerman is a snowman for grownups. He’s not your typical, more family-friendly build. Adults don’t have time to worry about aesthetics when they’re just trying to chill a few beers, you know?  Beyond that, we designed Beerman to feel a bit worse for the wear, if you will. It adds to his 'everyman' appeal, especially this year.”

And he seems to be the kind of character Coors wants to keep around. “Beerman is something we can look forward to every year,” Steele says.

In the Coors Light spot,the amorphous Beerman stands on the front lawn of a home where the owner has just waved goodbye to visitors. When the lights to the home go out, Beerman drags himself over to a waiting piano, cracks open a Coors Light and launches a familiar, soft ballad, "I looked out this morning and the sun was gone..."

Suddenly a nearby plastic nutcracker adds a drum downbeat, and soon, an Old English plastic choir standing in  line with their songbooks open  belts out the words to the title of Boston’s 1976 hit,  "More Than a Feeling."

The ad will be on digital platforms and social sites and was scheduled to have had a showing on the NFL’s Thursday night telecast and some Sunday games on Fox. It will be all over college football this weekend.

Beerman’s image will be  showing up on Coors Light cans in some places in New York later this month. Next week comedian Andy Devine will begin pitching drinkers on digital platforms to create their own funny snowman. Contestants can use social media to enter by the end of the year The winner gets a complete winter wonderland treatment for their yard, regardless of the climate.

The “Build Your #Beerman” campaign was created by DDB and Beerman was designed and built by Legacy Effects, which has created characters for other movies including “Jurassic World.”

The ad's focus on homesteads is an acknowledgement that off-premise beer sales is where the action is these days, not the tavern or sports bar where people used to tip a few. Coors Light says its off-premise sales are up 6% this year, according to Nielsen figures.

"Beerman brings levity to this time of year, as he exists simply to keep your Coors Light perfectly cold and bring a smile to your face," stated Marcelo Pascoa, vice president of marketing for the Coors family of brands.