The California Consumer Privacy Act, which took effect in January, gives consumers the right to learn what personal information has been collected about them by companies, have that information deleted, and prevent the sale of that data to third parties. The law also requires website operators to tell visitors they can opt out of the sale of their data, and include a “Do Not Sell My Personal Information” link on websites.

The newest set of proposed rules -- the fourth since the law was passed -- includes a revised graphic of an opt-out button that companies can place on their websites. The potential regulations say companies can place this button, which has a check mark on the left, and an 'x' on the right, immediately to the left of the words “Do Not Sell My Personal Information.”

The regulations also specify that the button “shall be approximately the same size as any other buttons used by the business on its webpage.”

An earlier set of proposed regulations also had a graphic of the opt-out button. That initial version of button, which also resembled a toggle icon, was widely viewed as confusing. 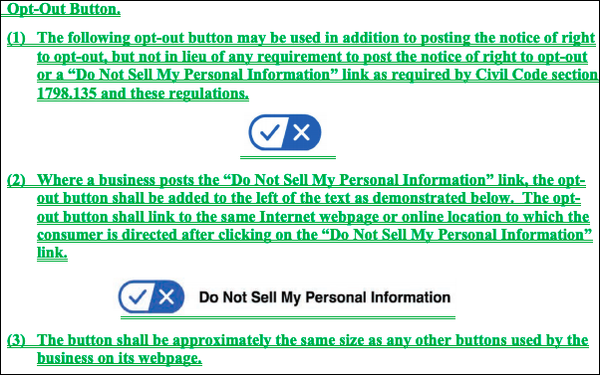