'Time' Names Biden-Harris As Person of the Year 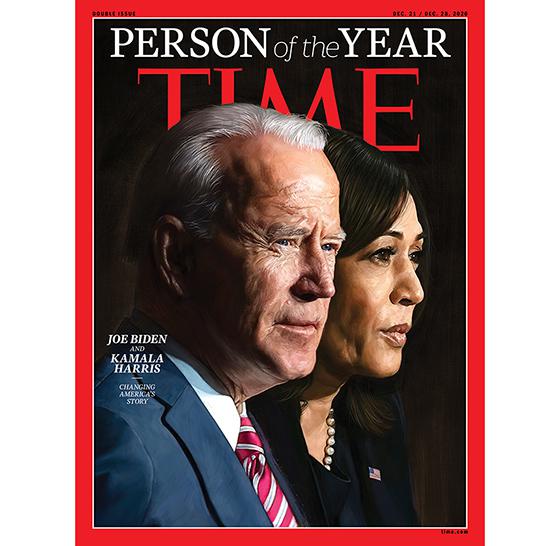 Harris is the first Vice President to be included in the choice for Person of the Year, a franchise that started in 1927 to recognize the person or group of people who had the greatest influence on the events of the year.

The announcement was made during a broadcast special on NBC Thursday evening.

It was the third major network broadcast partnership for Time this year.

Biden and Harris were chosen “for changing the American story, for showing that the forces of empathy are greater than the furies of division, for sharing a vision of healing in a grieving world,” writes Time editor in chief-CEO Edward Felsenthal.

The cover of the issue features a painting of the two by artist Jason Seiler.

“The task before the new Administration is immense. A pandemic to confront, an economy to fix, a climate crisis to tackle, alliances to rebuild, deep skepticism to overcome with many Americans dubious about unity with Trump voters, and an opposition party still very much under Trump’s sway,” Felsenthal notes.

In his letter to readers, Felsenthal writes: “The selection of Person of the Year is rarely easy, and this year was far more difficult than most… In Joe Biden and Kamala Harris, we have two individuals whose election mirrored and moved the major stories of this year and whose fates will shape the nation’s role in the world and the future of the American experiment.”

Time interviewed Biden and Harris in Wilmington, Delaware, on Dec. 7 for the Person of the Year issue.

Time also announced its editors’ selections for other categories, an addition to the franchise that began last year. They include: Businessperson of the Year, Entertainer of the Year, Athlete of the Year and Guardians of the Year.

The 2020 Businessperson of the Year is Zoom CEO Eric Yuan.

Entertainer of the Year is Korean pop group BTS.

Athlete of the Year is NBA star LeBron James, for his success with the Los Angeles Lakers and his activism this year.

The Guardians of the Year are Dr. Anthony Fauci, front-line health workers and racial-justice organizers.

magazines
1 comment about "'Time' Names Biden-Harris As Person of the Year".
Check to receive email when comments are posted.
Next story loading