Making A List, Checking It Twice: Here's The Year's Most Misinforming Sites 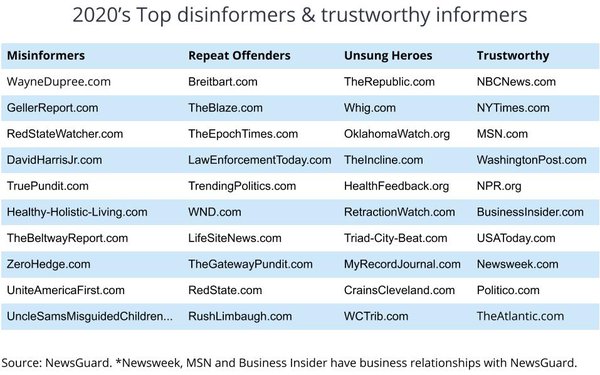 I'm pretty sure that when historians look back on this period they will remember it as the epic time in the war on truth. Hopefully, they will not remember it as The Epoch Times, which is one of the worst repeat offender websites publishing disinformation over the past year, according to NewsGuard, the news and information content ratings service created by a trustworthy journalist, Steve Brill.

NewsGuard, which just released its "top 10" lists for 2020, includes a ranking of the most blatant "Misinformers" (left-hand column in table above) followed by "Repeat Offenders," "Unsung Heroes" and "Trustworthy & Trending" sites.

It's not surprising that the ten most trusted publishers are among the most recognizable "mainstream media" ones. Or that the worst offenders are probably ones of you have never even heard of. Not that I'm encouraging you to check the out, or that I or NewsGuard would want to give them any more attention than they already have, but it's good knowing that someone is keeping an eye on them.

Perhaps even more insidious is the second column of "Repeat Offenders," which readers of TheRighting know include some of the most heavily trafficked extreme right-wing news and "information" sites, most of which ARE probably well known to you.

Don't get me wrong, I'm as keen on the First Amendment as anyone, which is why I applaud NewsGuard's right to publish its ratings, rankings and critiques, and why I'm using this column to amplify it.

So yes, these publishers have a right to exist -- or even persist -- but in the alternate realities that have become the composite known as modern day America, it's important that we have an independent third-party arbiter of their veracity. So kudos to NewsGuard for hanging in there in what must be difficult times. And if you're like me, I'm adding its "Unsung Heroes" list to my 2021 to do list.

5 comments about "Making A List, Checking It Twice: Here's The Year's Most Misinforming Sites".
Check to receive email when comments are posted.
Read more comments >
Next story loading