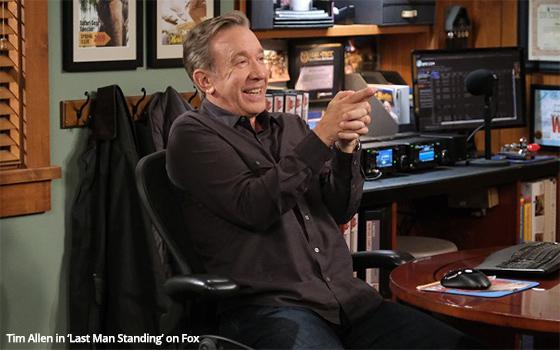 The contentious, divisive presidential election of 2020 goes unmentioned in the first two episodes of “Last Man Standing,” the Fox comedy starring Tim Allen as the only -- and apparently last -- politically conservative lead character on prime-time TV.

It is not as if the show is not in tune with current events. Indeed, the premiere episode of the show’s ninth and final season -- airing Sunday, January 3, at 8:30 p.m. Eastern -- deals almost entirely with COVID-19 and the restrictions and lifestyle changes it produced.

But perhaps as a way of distancing the show from the political fray of 2020, most of the season premiere (which the TV Blog previewed last week) takes place about three years in the future -- in 2023 -- when the pandemic will have finally run its course, according to the show.

Under this scenario, the presidential election campaign of 2020 is such a distant memory that it can be ignored by the characters in “Last Man Standing.” In effect, this strategy allows the show to sidestep the entire issue of right vs. left politics in the year 2020.

And not only that, no mention is made either of the administration of President Joe Biden, whose first term would then be half over in 2023.

The show’s most outspoken character has always been Allen’s character, Mike Baxter, a marketing executive with a large Denver-based company called Outdoor Man that operates a chain of retail superstores selling camping, hunting and fishing equipment and apparel.

For eight seasons -- six on ABC and then the last two on Fox -- Baxter has been known to rail against liberals, Democrats, political correctness and other issues that fly in the face of the traditional values he prizes.

He airs his opinions on the show in the context of a vlog he writes and produces as part of his marketing responsibilities. For Outdoor Man, his vlogs and the opinions he expresses are on-brand.

In former seasons, he was more outspoken. In one notorious vlog, he likened Franklin Roosevelt to Josef Stalin, and hilariously labeled them both “commie bastards.”

But the producers and writers of “Last Man Standing” have long been circumspect when it comes to the Baxter character and his opinions on current political figures -- most notably Donald Trump.

While it might be logical to assume that the character is a Trump supporter, that has never really been made clear on the show. Instead, the show -- and Baxter -- have largely steered clear of all that.

And while COVID takes center stage in the season premiere next month, the other big story of 2020 -- the outbreak of protests over police brutality and race -- is also ignored.

Fox provided the first two episodes of the final season of “Last Man Standing.” The second episode is less timely than the first, since it does not concern itself at all with COVID or any other current subject. However, for fans of Tim Allen, it is the better of the two shows.

That is because the episode has Mike Baxter coming face to face with Tim Taylor, the character Allen played on his first sitcom megahit “Home Improvement” on ABC in the 1990s. Allen, of course, plays both roles.

In this episode of “Last Man Standing,” the Taylor character is a former sitcom star who is now an executive with a tool company. He has left his TV-sitcom performing career far behind him, although he admits he misses it.

The conversations that the Baxter character has with the Taylor character about the nature of TV stardom, the challenges of writing and producing TV sitcoms and life in general are refreshing in their creativity.

Multiple references are made to “Home Improvement” too -- some of them obscure -- which makes the episode great fun for fans of that old and very sturdy sitcom.

The best of these is a conversation Taylor has with Baxter about Taylor’s old next-door neighbor -- the man named Wilson (played by the late Earl Hindman) whose face was always partially obscured by the high fence between their two properties.