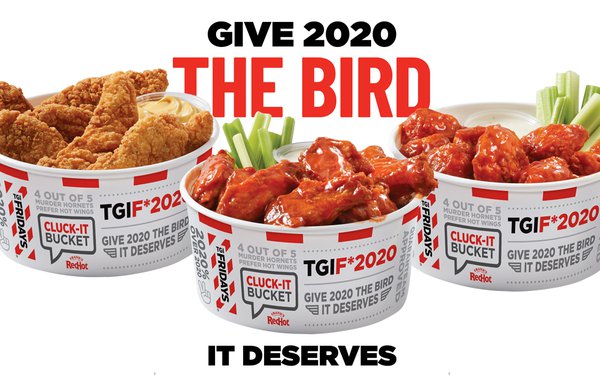 As 2020 draws to a close, TGI Fridays is encouraging people to take liberties with the letters in its name while sharing their thoughts about a year that rocked society and crippled many full-serve restaurants.

Suggestions from TGI Fridays include Thank Goodness It’s 2021 and F-2020, which can mean Forget this year… or something much coarser.

Just over half said they’d rather get a root canal than repeat 2020, while the admittedly worst habit among single respondents was staying in their pajamas all day/wearing too much “athleisure wear.”

The idea behind the survey was “to have a little bit of fun and maybe give people something to smile at—with a great value as part of that,” says Bittorf.

The company’s way of “giving 2020 the bird” is the Cluck-It-Bucket—a shareable entrée for $20.20 containing chicken fingers or boneless/bone-in wings as part of an 18-day promotion through Jan. 12.

On a more positive note, 72% of survey respondents thought 2020 has been a gift in some way.

“I think it’s great that coming out of a year that was really challenging for a lot of people, we’re finding the bright light and the optimism. We learned how to work from home. We spent more time with our family or we learned the value of our good health,” says Bittorf.

With a restaurant background that includes Bob Evans Restaurants, Boston Market and Boomin’ Brands, Bittorf joined TGI Fridays in February. “So you could argue my timing was terrible -- or my timing for a really interesting career opportunity was great,” she notes.

Forced early in the pandemic to engage in off-premises-only business, the chain saw a quick 4X increase in online orders.

“We stood up a brand-new online ordering platform, a brand-new loyalty platform and a new app,” Bittorf explains. “And we did it in a matter of months, where just the decision timeline to do that would have been six months in the past.”

TGI Fridays has approximately 300 restaurants open for business in some capacity.