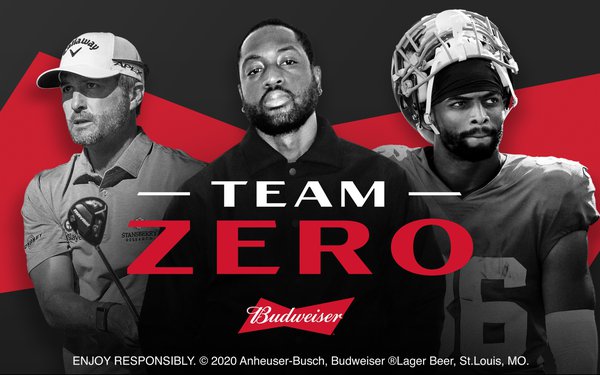 January is just around the bend, and you might know what happens to the alcoholic beverage business that month: nothing.

Since 2013, January has become Dry January, when either people who have resolved to quit drinking for the new year get down to it, or people who just drank too much over the holidays take a month off to sober up. Lots of people (maybe) actually do it. Lots of people, for sure, say they might.

It’s a big month for Budweiser Zero, the new non-alcoholic beer from Anheuser-Busch InBev. It’s launching Team Zero to help support the new abstainers by having celebrity athletes send motivational emails all month, along with offering discounts and rebates to purchase Budweiser Zero. It’s  the kind of a club you can join by promising you’ll try to do nothing.

Budweiser Zero debuted in July with a splash because of the involvement of former NBA superstar Dwyane Wade, who Budweiser says helped develop Zero and carries the title of co-founder.

Would-be club members can sign up at JoinTeamZero.com and follow BudweiserUSA on Instagram. One person will win a sweepstakes prize of two tickets to a game in next year’s World Series.

Beside Wade, other jocks involved include Darius Slayton, a wide receiver for the New York Giants; Jordan Henderson, an English professional footballer and member of the national team; Paul Bissonnette, a Canadian and former NHL player; Georges St-Pierre, a Canadian UFC champion; and PGA golfer Kevin Kisner.  The athletes will also be talking up Zero on their social media excursions.

The beer is also sold in Canada and the U.K., where non-alcoholic beers are considerably more popular than they are here.

Beer Marketer’s Insights, citing data from the research firm IRI, says non-alcoholic beer sales are up 40% this year in dollars and 30% in volume. A spokeswoman for Budweiser Zero, also citing IRI data, says it’s been the second-fastest-growing non-alcoholic  beer since it debuted.  According to IRI data cited, Zero’s average sales per store per week beats Heineken 0.0, its major competitor.

Though growing, sales of non-alcoholic beer makes up less than half a percentage point of all beer sales. The marketing hook for Zero may be its association with athletes, who want a low-calorie beer. Zero has 50 calories per bottle.