Got Values?: GOT BAG Bakes Meaning Into the Model 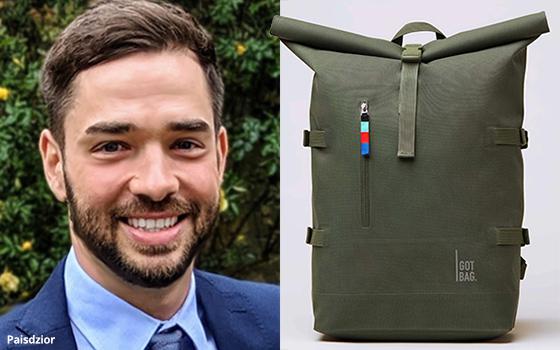 "Values-based" branding is the sort of good intention that marketers can quickly exploit and wring of any remaining drop of authenticity. Using au courant buzzwords like "Sustainability," "impact" and "meaning" with any believability is itself a challenge now. And so the German startup GOT BAG caught my eye recently because their overall mission and recent discounting promotion persuaded even this cynic that the they may actually mean what they say. Begun four years ago by two surfing buddies who were dismayed by the ocean plastic blight, GOT BAG's core offering recycles this refuse into backpacks. But as Head of North America Matthias Paisdzior tells us this week, the company's connection to cleaning up the oceans runs much deeper than simple recycling. They created a new supply chain that not only bakes the mission into the brand's business model but changes the lives of its suppliers. It is a good reminder to marketers that we may want to think harder and deeper about what "values-branding" can and should mean. You can listen to the entire podcast here.

MediaPost: What sort of growth has the company seen in terms of sales?

Matthias Paisdzior: The launch was end of 2018 in Germany. And they started together as two people, classic startup. Within two years, we are now 42 people working for GOT BAG, and the company just reached the $10 million revenue mark this year.

MP:  What's the compelling value proposition for me in buying these bags? How do you communicate that to me and pull me into the mission?

Paisdzior:  By your buying the bag, you have a lot of impact not only by, in the first place, helping to take plastic out of the ocean and turning it into a backpack. We don't just buy our plastic, for example, from another organization, which other brands do. We really run our own clean up in Indonesia on the North Shore. We work with 1500 fishermen. The fishermen, because of overfishing and because of all the plastic pollution, don't catch enough fish anymore to really make a living. But what they do catch is a lot of plastic. They threw away that plastic, which would end up in the ocean again. We pay them for the plastic trasht and turn it then into the backpack. That is the first impact you have. But we also work with local authorities in Indonesia, where we really help to raise awareness about the problem of plastic pollution. We help them build up a plastic waste infrastructure system.

MP: A lot of brands that are values driven often abstract the mission.

You're describing a story where the full supply chain actually has an impact.But it's an intricate story. How do you make that a part of the brand message?

Paisdzior: A lot of brands use a mission-driven approach as a  marketing technique. From the very beginning we were openly communicating how sustainable truly our products are, how we have full control of the whole production chain. It all started with a Kickstarter campaign where you really focus on what the company is doing. And then just the organic growth of Instagram, which is by far the main reason why we are so successful in Germany, and getting bigger in Europe and now in the States.

Paisdzior: They didn't really have a media plan. They just try to get it out there be open, be honest, have a cool product, of course, have cool footage around it, but also be very open and so they grew. [The CMO] called it “growing by accident”. But over time, obviously, the media plan grew. What helped a lot was collaborations with other sea organizations as well. For example, Sea Shepherd. We sell branded GOT BAGs with a Sea Shepherd logo on them. They helped us raise a lot of attention for what we do at the end of the day. We work together with a lot of other organizations focusing on the ocean. And that's basically what gave them the biggest growth.

Paisdzior: I would say so. We found that the biggest growth in Germany is really that organic Instagram over time with just always putting out stories about say our clean up in Indonesia, showing what we do each day over there, people feeling close to us, really going on this journey with us. And that's really what helped us grow organically.

MP: Was there paid media behind it, too?

Paisdzior: In the beginning it was mainly organic but the bigger the brand grew and the more audience we wanted to target, I would say in Germany we invested heavily on paid social.

MP: Now your job is to bring this to the US. Where are you, what's the timeline here? When did you really start selling in the US?

Paisdzior: We started selling in the US about eight weeks ago. You really need team members in the US. You need someone who can do the networking in the US. We work with [an agency] based out of Toronto, Canada, Abacus agency. They’re of huge help. And it's been quite successful so far, which is great.

MP: So you mentioned differences, you had to better understand the differences between the German market in the US market. What are they?

Paisdzior: There are so many. So the biggest issue we had to face was Instagram as our main driving factor for success in Germany and Europe. We couldn't leverage that in the US because, for example, our Instagram account was in German the whole time. So you really start from the scratch in the US. So that means we really just started with some PR around it and reached out to some people and mostly just really the paid social. We also had to find the right ads that really trigger people. In the beginning, we tried to really rely on that mission driven focus like we did in Germany. But we realized pretty fast that doesn't really work well. On Instagram you have maybe two or three seconds to decide if you like it or not. And if you start with a mission focus, people lose interest. They just think it's another ocean organization or whatever. So we had to play a little bit with how do you start the ad, for example. Based on A/B tests what really helps the most is showing the person on the phone, what's the benefit first that I get out of this bag, and then on top of that, oh, it's a sustainable bag. We start, let's say, with a picture of the backpack and it just highlights all the good things - it’s 100% waterproof, it's adjustable and durable, it comes with a two year warranty. And then on top of it, it says, “And it's made from 100% ocean plastic.” And then, a little bit afterwards, we tell a story about what's the vision behind it.

MP: I'm going to refrain from any thoughts about what that implies about the American consumer.

Paisdzior: I didn’t say that! It sounds terrible but it definitely wasn’t meant that way. The key difference between Europe and the US is really the basic consumer first things. What do I get out of that?

MP: Right, what's in it for us. You can't argue with A/B testing.

Paisdzior: Exactly. And we try to put the mission in the beginning, and it didn't work. I see it's 100% waterproof, and I get a warranty and everything, and now I'm interested.

MP: Why haven't you ever discounted?

Paisdzior: You will increase your sales short term but in the mid and long term, we think it will harm the brand and will harm the pricing of the brand. So we don't work with any discounts at all.

But this year on Black Friday, we had to make up for that loss in [pandemic-reduced] retail sales. We decided, okay, we're going to participate in that Black Friday madness, which we also don't really want to want to support. his whole consumerism, this whole Black Friday madness is not good for our planet. So we decided to give 20% for Black Friday that week. But we combine that basically with what we called our Impact Week. It started the week before Cyber Monday. We're giving 20% but at the same time we're trying to recycle 20 tons of ocean plastic within that week. And at the same time we communicated from the beginning that we will donate a big share of that Black Friday revenue to Whale and Dolphin Conservation. So this is basically how we address why we're giving out discounts. And it was a huge success. I think, we recycled within that week 21.4 tons of plastic.

Paisdzior: Yeah, we're working on it right now. And because, as I mentioned, we don't just want to be that brand that comes from Germany and sells products in the US. We really want to be here. That's why we opened an office in Portland, Oregon, to really be on the ground and do work in the US and really raise awareness in the US. And we are co-hosting clean ups right now also within the US. There's one for example in Florida. It's called Send It 4 The Sea. There's a big cleanup on December 27 that we are co-hosting. We also give them, for example, our backpacks and a road trip as an incentive for volunteers to come in first of all to see all the plastic that they catch, that they clean up. And we're working on several different options right now to start and host our own cleanups in the US because we did that before in Germany, in Europe, and it was a huge success.

MP: How do you take marketing advantage of an event like that? What made it a success?

Paisdzior: What made it a success is really that you play it on your Instagram. You show that once again you are true, you're not just, selling backpacks made out of recycled plastic out of a marketing reason. Your mission is really to raise awareness and so we use our social influence to get volunteers out to really do something good with us, to really clean up. The plastic pollution is a global crisis, not only in Indonesia where we run our cleanup. We really have to raise awareness everywhere. Then again, when you asked out of a marketing standpoint, how does that help you to organize cleanups or to be a part of cleanups, it really shows your audience at the end of the day that what you do is really something you believe in, and that you’re true, you’re authentic.