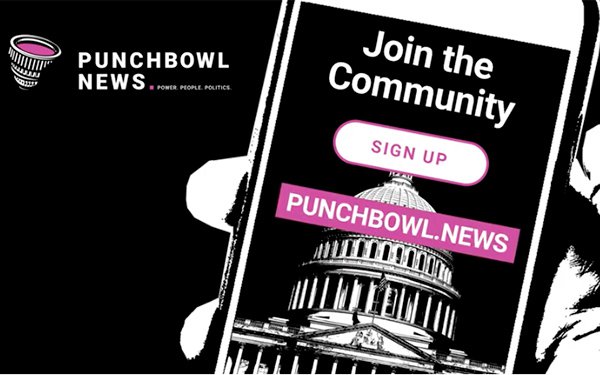 Jake Sherman, Anna Palmer and John Bresnahan are cofounders. The name “Punchbowl” comes from the Secret Service nickname for the Capitol.

Sherman and Palmer have authored the Politico Playbook newsletter for the past four years, after founder Mike Allen left in 2016. (Allen and former Politico CEO Jim Vandehei went on to create Axios.)

“We’ll focus relentlessly on the people in Washington who make decisions, and on the news and events that will move political markets,” reads a description from the three founders on the Punchbowl site.

The newsletter promises to cover the power, people and politics in Washington, D.C.

Punchbowl's flagship morning newsletter will be available for free, and include breaking news, analysis and context about the political, legislative and media climate in D.C. every weekday.

Members can pay $30 a month or $300 a year for access to Punchbowl’s other content offerings, including a midday and evening newsletter.

The midday newsletter will include updates on political news from the morning.

The evening one will feature a short wrap-up of the day, and what's to come on Capitol Hill. It will also include a round-up of the goings on in the Washington social scene.

Punchbowl will publish profiles on political players in the news, too.

A Sunday night show called “The Lookahead” will feature Sherman, Palmer and Bresnaham breaking down the news and discussing what to expect in the week ahead at the Capitol and the White House.

Punchbowl will also offer “VIP events” as part of its membership program. Members will get invitations to exclusive dinners, cocktail hours, interviews, parties and networking events in New York, D.C. and the West Coast.

Politico says it will name a new Playbook team on January 19, before the presidential inauguration.