Ted Danson For 'Mayor'? It Is As Unbelievable As It Sounds 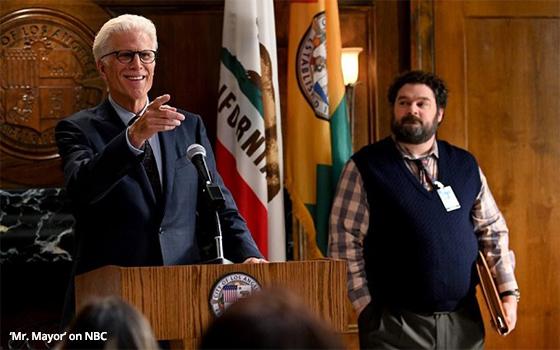 With our national politics in turmoil, and our culture wars at a fever pitch, this would not seem to be an opportune time to introduce a lighthearted comedy series about a wealthy, gadfly-ish outsider who is elected to the first and only public office he has ever held.

Nevertheless, this is what NBC intends to do Thursday night when it introduces this new comedy, “Mr. Mayor,” with two back-to-back episodes starting at 8 p.m. Eastern.

This show appears to be a creation of Tina Fey and Robert Carlock, who formerly collaborated on “30 Rock” and other shows.

Fey and Carlock are two of the executive producers on “Mr. Mayor.”

With this in mind, it is reasonable to assume that “Mr. Mayor” will try to do for a big-city mayor's office what “30 Rock” did for network television -- namely, give us a high-spirited, satirical look behind the scenes at a high-profile, fictional workplace. In this case, it is the office of the mayor of Los Angeles and his eccentric staff.

One of the attractive qualities of “30 Rock” was that its creators (or at least one of them, Tina Fey) had an intimate knowledge of the workplace the show depicted -- a network variety show produced at 30 Rockefeller Plaza in Manhattan, like “Saturday Night Live.”

The same cannot be said about the fictional mayor's office in “Mr. Mayor.” In the first two episodes (which the TV Blog previewed), the snappy dialogue seems forced and the situations contrived.

This fictional mayor's office feels as if it is based mainly on other such depictions from TV shows and movies that are already far removed from the real thing.

In “Mr. Mayor,” the titular figure is played by Ted Danson, who is beginning to seem like the only 73-year-old sitcom actor anyone ever calls when there is a role available for a man his age.

His mayor character is a single father with a 15-year-old daughter. She is a character we see much too much of in the first two episodes of the series.

Unless NBC feels strongly that putting her front and center in every show will somehow draw a coveted group of teens to this show, which happens to be headlined by a man in his 70s, then the network should shelve that notion and rein in the father-daughter storyline.

On the other hand, a number of the adult characters in the show -- most notably the mayor's aides -- are usually seen wringing their hands, complaining about their lives in sing-song voices and/or rolling their eyes. They are teens in adults’ clothing.

In addition to Danson, the other boldfaced name in the cast of “Mr. Mayor” is Holly Hunter, 62, who plays an ultra-liberal city councilwoman who stands in opposition to everything the new mayor wants to do. The character, at least as seen in the first two episodes, is charmless.

For that matter, none of the characters in this show are particularly likable, starting with the mayor himself. It is possible we are supposed to think of him as roguishly charming in some way. But unfortunately, Ted Danson is not Cary Grant.

It is possible the writers of this show set out to position their fictional outlier turned-mayor character as a likable version of Donald Trump. But they might have created a better character if they had made their mayor and his personality a little more edgy -- like Trump, only better.

Surprisingly, given the various people who have come together to make “Mr. Mayor,” the show is a dud.