Who's On First? Why Mobile Increasingly Isn't My 'Second Screen' 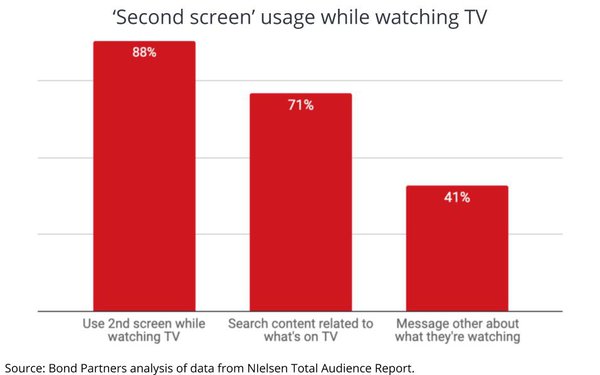 Every new medium gets on base by comparing itself to the most established and valuable medium, and for most of the last century, that's been the television screen. So it shouldn't have been surprising that mobile screens -- both hand-held smartphone and tablets -- would be characterized as the "second screen" relative to TV. But increasingly, it's actually the primary one.

Take my household as an example. Over the past year, we got rid of all our conventional TVs and "set-top devices" and traded them in for connected TVs. But much of the time, I'm actually watching TV off of my phone. Usually, that's a workaround, because the content provider doesn't allow me to stream directly to my CTV, just my phone.

That's often the case with press "screener" sites, and it was definitely the case for HBO Max until it finally resolved a carriage agreement with Roku, the maker of the CTVs I use.

So for the first few months of service, I was actually watching HBO Max via my phone, and casting it to my TV.

My wife was mystified by this and thinks I'm some kind of magician summoning premium content from my phone and throwing it on the big screen in our living room.

For me, it's become second nature, and I've become completely agnostic about which screen's on first, or as Lou Costello might have said, "second."

Of course, I was indoctrinated by my nephew Josh Lovison years ago, when he was the mobile lead at IPG Media Lab advising some of the world's biggest technology companies. That was more than a decade ago, but Josh convinced me that -- someday, when bandwidth got good enough -- I'd be using my phone as my central media content server, and relaying it to the best available screen.

While my mobile bandwidth may not be quite there yet, it's not bad, and I can tell you that during the past couple of years when my Northeastern community experienced protracted power outages, I was able to stream all my TV content via my phone's LTE service, even without 5G connectivity.

So while my cable modem is still our household's bandwidth of choice for now, it may not always be. But content serving aside, my mobile device often becomes my first screen, mainly because the phone app version works better than the TV version. That was the case in the HBO Max and press screener sites described above, but I often find scrolling through content on my YouTube TV app is actually easier than doing it on my TV interface.

So while I may end up watching TV on my bigger screen, my mobile device frequently is the first screen for searching and selecting the content I watch there.

What got me thinking about which is my first or second screen? Actually, it was a pitch I got from a PR rep citing some relatively dated data from Nielsen's second quarter 2018 "Total Audience Report" showing how often Americans have been using their second screens while watching their first screens (see above, and a more detailed break below [with the bonus of some "second speaker" data about audio content]).

Nielsen's 2018 benchmarks make sense, but it got me thinking about how behaviors have evolved, especially during the pandemic when so many people were accessing more content than ever, albeit from home. Nielsen did release a special "Total Audience Report" in mid-2020 showing increases in "from home" consumption, but it didn't break out any data on how mobile devices were impacting that explicitly.

So here's my prediction: Even though many Americans were stuck in their homes with big TV screens available to them, I think we're going to see usage growing of mobile devices to control -- and in many cases displace -- TV screens.

The torrent of new app-based streaming services -- from Disney+ to Peacock to Discovery+ -- will only accelerate that.

And it's no coincidence that two of those services (Disney+ and Discovery+) were provided to me free by my mobile carrier, Verizon. In fact, I just used my phone to watch a 1953 episode of the Abbott & Costello TV show to research "Who's on first."