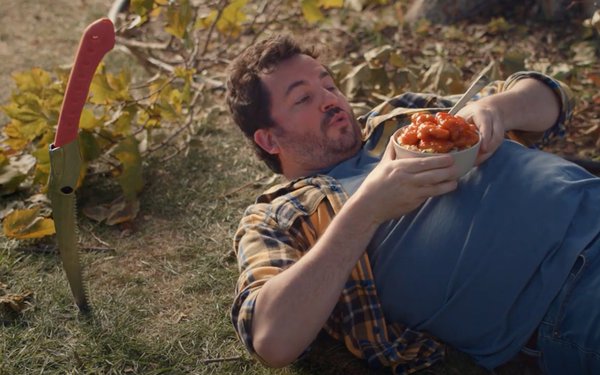 Frozen Asian food brand InnovAsian is doubling down on humor, regional audience targeting and increased frequency within commercial pods to lift brand awareness in a category led by P.F. Chang’s.

Four new spots that broke this week on digital platforms and in regional television markets focus not on InnovAsian ingredients or taste, but instead offer up Asian food as the ultimate comfort to everyday mishaps.

The commercials build on the “That’s An InnovAsian Occasion” campaign that debuted in February 2019 from the Duncan Channon agency.

“If it ain’t broke, don’t fix it,” the agency’s executive creative director, John Kovacevich, tells Marketing Daily.” “We didn’t want to overthink it. We just kept them fun and funny.”

In a spot titled “Battling Backyard Vegetation,” a man trimming a tree plummets to the ground accompanied by the caption “Do NOT try this at home.” As he lies on his back, his spouse comes to the rescue with a bowl of InnovAsian orange chicken.

“Stuck In A Never-Ending Renovation” depicts a woman’s surprise and frustration as she strips wallpaper, only to encounter one layer after another—before sitting down for a food break.

Instead of a broad,national TV buy, InnovAsian is targeting audiences in 14 regional markets in the Midwest and South.

“The media buy is focused on targeting frozen Asian/international food buyers, as well as past purchasers of InnovAsian. On CTV, we can reach that audience specifically,” says Duncan Channon associate director of communications planning Emily McCormick.

On cable and network TV, “We tailored the buy to select networks/programming that over-indexes for this audience.”

InnovAsian will mix and match two commercials from the original campaign with four new ones while running two :15’s as bookends in the same pod, separated by ads from other brands.

“The entire creative strategy was, how do we get people to feel like that brand is something that they’ve heard of so that they’ll reach for it in the freezer aisle?” says Kovacevich. “The two :15’s make a bigger impression than a single :30, and your dollars go farther.”

According to Duncan Channon, InnovAsian is the #2 frozen Asian brand behind P.F. Chang’s.