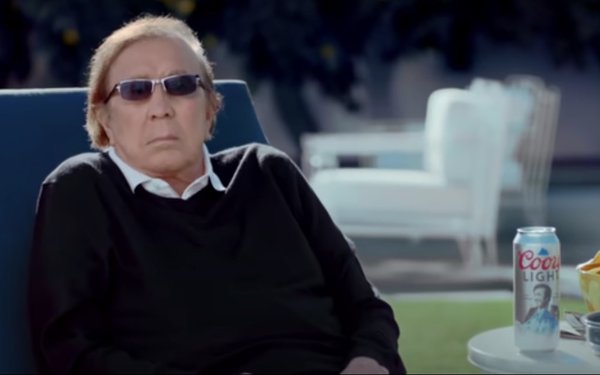 In a week like this, maybe the nation needs a Light cause as a diversion.

Coors Light has launched a campaign to get former quarterback star and coach Tom Flores enshrined in the NFL Hall of Fame.

For the whole of January, his likeness will show up on Coors Light cans.

A humorous ad  that began airing on Wednesday, plays up his nickname--he’s known as The Iceman for his cool demeanor. In the ad, he’s chilling on a lawn chair in his backyard, playing chess with his grandson, and having a Coors Light.

A voiceover says, “Football legend Tom Flores, aka The Iceman, aka the first Hispanic quarterback and head coach ever, aka four time champ, aka -- why isn’t he in the Hall yet?” At that Flores shrugs, as if to say, who knows?

He has some pretty cool credentials. Flores was the winning head coach in two Super Bowls, for the Oakland Raiders in 1981 and the Los Angeles Raiders in 1984 and once as an assistant coach in 1977.  He’s the only former NFL coach who has won two or more Super Bowls not enshrined.

He was also the quarterback for the victorious Kansas City Chiefs in the 1969 Super Bowl, and the first Latino and minority head coach in the league.

And, oh yes, at one time he was a Coors distributor.

"We're honored to put Tom on our cans, but we won't chill until he's carved out of bronze," said Marcelo Pascoa, the Coors Light global vice president of marketing, in a press statement. “With few Latino players currently in the hall, we believe The Iceman deserves to be recognized for being an outstanding player and coach who broke barriers for other Latino athletes. “

Through Feb. 6., fans visiting CoorsLight.com/Iceman can sign a petition of support for Flores the brand says it will display on mobile billboard in Canton, Ohio, the home city of the NFL Hall of Fame, on the day of the vote.  Visitors to the site will also be able to sign up for a rebate on a Coors Light six-pack.

Typically the new inductees are announced shortly before the Super Bowl, which this year is Feb. 7.

Flores, now 83, told ESPN he was “kind of disgusted” last year, when he was passed over for membership despite being a finalist in the coach category.  Instead, former head coaches  Jimmy Johnson and Bill Cowher, who are also hosts on network television pre-game shows, were picked.

Flores was also passed over in 2019, and the dual snubs outraged fans and other NFL insiders alike, some alleging that the NFL committee favored former players and coaches who still had a presence on TV. From 1997-2018, Flores worked on the Raiders radio network, but not before a nationwide audience.

He seems to ready for his third chance. "Although I have a good shot to be in the Hall this year, it's still nice to get a little extra support from my favorite beer,” he said. "Self-promotion is not really my thing, but I admit that it's flattering to see my picture on a Coors Light can."

beer, sports
1 comment about "Coors Light Pushes To Finally Get Tom Flores Into NFL Hall Of Fame".
Check to receive email when comments are posted.
Next story loading