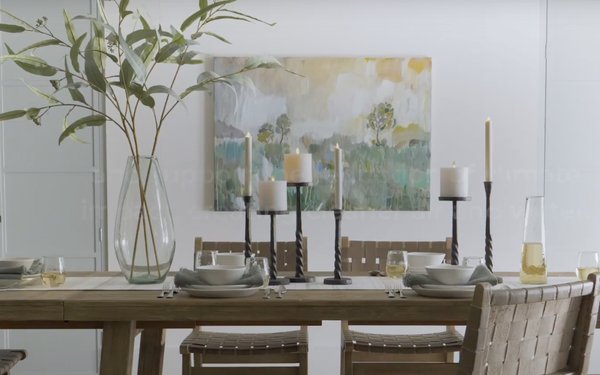 To offset the impact of its wooden furniture, Pottery Barn is on a mission to plant three million trees.

This is the latest step from a major brand to bring a sustainability message to life for its consumers, as companies try to look beyond the pandemic's ongoing drama.

Pottery Barn, owned by Williams Sonoma, says it intends to plant the trees by the end of 2023 -- one for every piece of indoor wooden furniture it sells, beginning with high-need regions in the U.S. and abroad. This is a partnership with the Arbor Day Foundation, the largest nonprofit dedicated to trees in regions with the greatest need, including the U.S.

By the end of this year, the company aims to make sure it uses 50% responsibly sourced wood. (Currently, 42% hits that goal.)

The move comes as many companies and consumers have devoted their attention to causes more closely linked to the pandemic.

"Global warming, chronic disease and other societal challenges have not declined in the last year," says David Hessekiel, president of Engage for Good, a group that focuses on social and business impact. "But increased concern about the pandemic, racial justice and our economic decline has made it extra difficult to raise funds for groups addressing issues that are not linked to these serious ‘front burner’ problems.

In its latest ranking of the Top 100 charities, led by United Way and Feeding America, Forbes says the largest environmental organization is the Nature Conservancy, which ranks No. 20. An environmental group doesn't appear again until No. 60, with the World Wildlife Fund.

Pottery Barn's offerings already include organic, sustainably sourced, fair trade and handcrafted items. And Williams Sonoma says it is the only home retailer on Barron's 100 Most Sustainable U.S. Companies list.

That's not to say that the pandemic hasn't been good to the San Francisco-based retailer. While store closures hurt retailers overall, some observers say Williams-Sonoma is outperforming competitors

The company's "business has changed dramatically in the past ten months," writes Seth Basham, an analyst who follows the company for Wedbush Securities. "Sales have surged through its ecommerce segment to more than two-thirds of total sales."

He says the company has a scaled, efficient ecommerce business, "selling mostly own-brand margin-rich products, while its retail business is heavily burdened by high occupancy and labor expenses."

He argues that the company will continue to perform more profitably as it increases "its highly profitable ecommerce business while focusing on fewer, better stores."

In its most recent quarterly results, the company showed it is still benefiting from stuck-at-home Americans intent on prettying up their surroundings.

retail
1 comment about "Pottery Barn Is Planting Trees -- Will More Brands Lean Into Sustainability?".
Check to receive email when comments are posted.
Next story loading