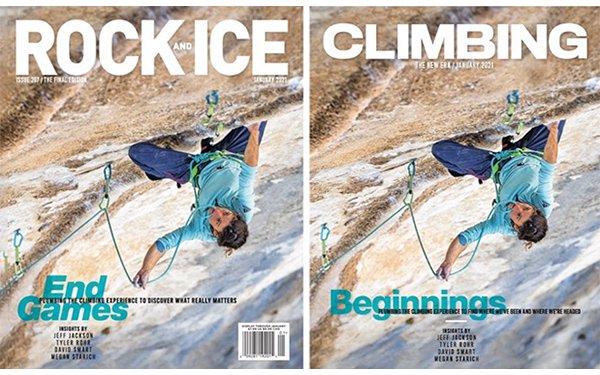 Enthusiast magazines Rock and Ice and Climbing, which have been rivals for 36 years, are now one entity.

The future merger was announced when Big Stone Publishing was acquired by Pocket Outdoor Media in October 2020.

The new combined publication, called Climbing, debuts this spring — but it will be written by the editorial staffs of both magazines. To date, there has been no mention of staff reductions.

The future Climbing will include art makeovers and upgrades, as well as more content and higher production values.

Editors describe the alliance as “having a partner to help solve an elusive crux, rather than trying to unlock it yourself.”

It also means double the digital editors: Michael Levy from rockandice.com and Kevin Corrigan from climbing.com will helm Climbing’s site. Climbing’s annual Ascent, the yearly compendium of stories and art, and Gym Climber, a pub for indoor climbers, remains.

When the acquisition was announced, Robin Thurston, CEO of Pocket Outdoor Media, stated: “By merging Rock and Ice into Climbing, we’ll be better positioned to deliver exceptional content and cover all of the sport’s disciplines — trad, sport, gym, bouldering and alpine climbing — in ways not possible before.”