McDonald's Barrels Into New Year With Chicken And Marketing Might 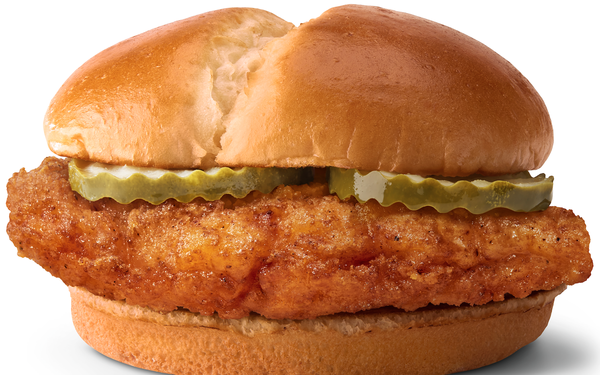 Keeping up with the fast-food fried chicken wars these days is almost as challenging as tracking the NFL's reserve/COVID list. In case you missed an installment, both McDonald's and Shake Shack shook up their menus recently, announcing new chicken items. KFC is clucking back, introducing what it insists is its best chicken sandwich ever. And of course, Chick-fil-A isn't slowing down its efforts to win people over to its style of poultry poetry.

"We expect chicken to be at the core of innovation in 2021 and beyond," writes Wedbush analyst Nick Setyan, "including a new crispy chicken sandwich and the return of spicy nuggets in the first half," perhaps even in the first quarter.  Additional drivers through 2022 include the launch of the McPlant platform, quality improvements in existing burger brands already launched successfully in Australia and Canada, and an ongoing focus on breakfast (coffee+) and value."

Setyan also thinks other analysts don't fully appreciate the sales-boosting potential of the new loyalty program, scheduled to debut mid-year. He says McDonald's app currently boasts more than 80 million downloads in the U.S., with more than 60 million registered users. He estimates the rewards program could contribute to same-store sales growth, as well as allowing the company to mine customer data to boost sales for years to come, as rivals Starbucks and Domino's have done for years.

At Oppenheimer, analyst Brian Bittner upgraded his evaluation of McDonald's and downgraded Wendy's.

It's the first time the firm has predicted McDonald's can outperform its peers since 2012. Even as Bittner lowered his earnings estimate for the Chicago-based fast-food giant, he's more bullish. "We believe the dominant U.S .business enters 2021 armed with upgraded sales strategies to drive outperformance," he writes, with potential for recovery in McDonald's hard-hit international business.

Chicken is part of the success recipe. Bittner writes that McDonald's is well-positioned to build its share in the U.S., where it already is performing well during COVID-19. The rollout of its inaugural loyalty program, My McDonald's, may also help, as will its marketing muscle, smarter social media strategies and product innovation, "including the upgraded chicken platform rolling out in February."

Meanwhile, things are looking up in the restaurant landscape, at least a little. The latest report from Baird, based on its weekly interviews with restaurant chains, says comparable sales jumped a sharp 6%, fueled by stimulus checks. And while Baird believes that will fade in the weeks ahead, it's optimistic about additional stimulus spending as the new Congress gets to work and vaccines are gradually rolled oukt.