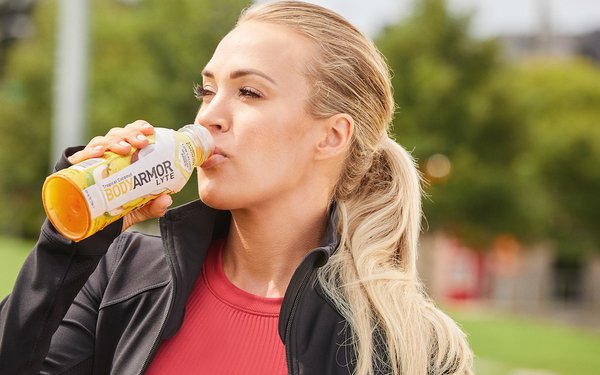 As it seeks to become the country’s #2 sports drink, Bodyarmor is expanding beyond sports notables in an equity and promotion partnership for its Lyte version with music star and fitness entrepreneur Carrie Underwood.

It’s the first national television campaign for Bodyarmor Lyte, and will run through the summer on digital platforms along with cable, network and connected TV.

The campaign debuted Monday night during “The Bachelor” on ABC and featured Underwood along with NBA star and Bodyarmor endorser James Harden.

A 30-second campaign spot from the EP+Co agency opens with Underwood at an indoor morning workout as Harden asks, “Calling it a day, Carrie?”

“Oh no, there’s more,” she responds—before the rest of her day flashes by in a sequence of work and fitness activities. “And I should wrap by midnight.”

The campaign coincides with a year in which Underwood marks the sixth anniversary of her fitness and lifestyle brand Calia by Carrie Underwood, which was created exclusively for the Dick’s Sporting Goods retail chain.

As part of the deal, Underwood is making an equity investment in Bodyarmor.

After Lyte was launched in 2017, “Unbeknown to us, she was a huge fan,” Bodyarmor vice president of marketing Michael Fedele tells MarketingDaily. “Carrie obviously opens up an entirely new audience. So many adults are looking for better hydration.”

Bodyarmor Lyte is seeking to broaden its target audience beyond the sports realm to consumers who are seeking beverages low in sugar and calories and contain no artificial colors, flavors or sweeteners.

Underwood also will appear in ads for Bodyarmor SportWater.

He says Bodyarmor is on track “to become the #2 sports drink this year” by moving ahead of Powerade, which is owned by Coca-Cola.