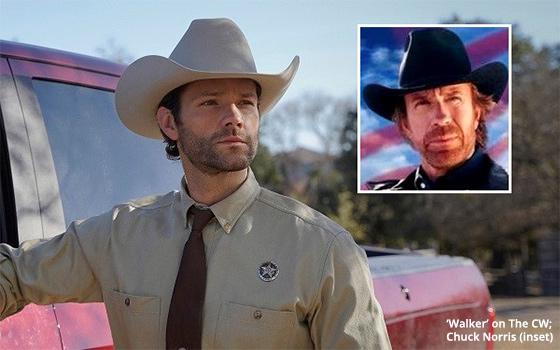 The second-most anticipated new series of the winter TV season (at least for yours truly) was this new “Walker” series on The CW descended from the old Chuck Norris action series “Walker, Texas Ranger.”

With high hopes, I screened the premiere episode of “Walker” on Friday only to have my hopes and optimistic expectations totally dashed.

“Sleepwalker” is what they should have called it. Instead of generating excitement in the manner of the old series, the new “Walker” premiering this Thursday induces drowsiness.

If memory serves, the original Cordell Walker played by Norris (inset, above) was a man of action who could be counted on to apply his formidable fists and feet of fury with frequent fierceness.

“Less talk, more action” would seem to be the operating philosophy for a so-called “action” TV series, and the original “Walker, Texas Ranger” followed that credo to the letter. But in the new “Walker,” the philosophy seems to be “less talk, less action.”

The new Cordell Walker (played by CW stalwart Jared Padalecki from the long-running CW series “Supernatural”) is still a Texas Ranger, even if those words have been dropped from the show’s title for reasons unknown (and also unfathomable).

The new Walker is a man of few words who is mourning the violent death of his wife (a murder shown in flashback) and his estrangement from his family who include a teenage son and daughter, his gay brother and his parents.

Walker’s estrangement stems from an undercover assignment in which he suddenly disappeared from their lives for a time. In the series premiere of “Walker,” he is seen returning from this secret journey and struggling to reconnect with his family, especially his teenage kids. Are you yawning yet?

The makers of TV shows such as this are somehow under the mistaken impression that viewers at home can be made to care about a lead character and his problems by staging tedious, talky multiple, heart-to-heart talks between the character and various others while sad music plays in the background.

There was plenty of this in the series premiere of “Walker,” and not nearly enough of what 99% of this show’s audience will tune in to see, which is: Walker opening up multiple cans of whoop-ass at the slightest provocation many times throughout the one-hour (actually 42-minute) episode.

But unfortunately, in the series premiere of “Walker,” the new Walker tunes up only one guy, and not until 25 minutes into the show either.

And get this -- he is called on the carpet by both his partner and his superior officer for using excessive force and then told to make sure he doesn’t do it again. What? Come again?

Who do the producers of the new “Walker” and their network enablers think Walker, Texas Ranger, is anyway? He is a guy who uses too much force, and millions of fans of the old show loved him for it.

Thus, the idea that the new Walker has to rein in his “punch first, ask questions later” approach to effective policing would not seem to bode well for the show going forward unless the show aims to have Walker violating this order repeatedly in every subsequent episode.

At the risk of making a bigger thing out of this than it deserves, the new “Walker [Texas Ranger]” symbolizes one of the things that is wrong with the world right now.

Or in the case of “Walker” vs. “Walker, Texas Ranger,” they took a two-dimensional character (which was fine with everybody) and gave him a third dimension in the form of a backstory plus emotions such as grief, sadness and feelings of loss that will entertain no one.

Oh well. Now that the new “Walker” has emerged as a huge disappointment, the only hope here is that this winter’s No. 1 most-anticipated new show -- “The Equalizer” on CBS starring Queen Latifah -- will not come out of the same dreary mold.

That show premieres on Sunday, February 7, right after the Super Bowl on CBS. Take that, Sleepwalker!