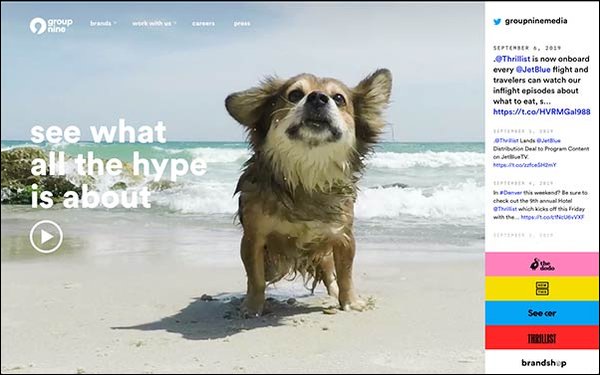 Investors can now trade the stock and warrants, which are contracts to buy more shares, in Group Nine Acquisition Corp. (GNAC) on the Nasdaq exchange. GNAC is a special purpose acquisition company (SPAC) that Group Nine created last month to raise cash for transactions.
GNAC yesterday priced its initial public offering of 20 million units -- a mix of common stock and warrants -- at $10 a unit for a total value of $200 million. The company will receive net proceeds of $189 million after underwriting discounts and commissions.
GNAC disclosed in a public filing that it plans to combine Group Nine Media and "another target business in the digital media and adjacent industries, including the social media, ecommerce, events and digital publishing and marketing sectors." The company hasn't named any deal targets yet.
Ben Lerer, CEO of Group Nine Media, leads GNAC as CEO and a director. Brian Sugar, president of Group Nine Media and former CEO of PopSugar, is president and a director of GNAC, while Sean Macnew is CFO of both companies.
GNAC announced Richard D. Parsons, former CEO of Time Warner Inc., joined the board of directors. Jen Wong, COO of social news site Reddit Inc. and former president of digital at Time Inc. also is a new GNAC board member. GNAC granted them 25,000 units each.
SPACs have become a more common way for private companies like Group Nine to raise money and go public, while avoiding the more time-consuming process of an IPO. Richard Branson’s Virgin Galactic Holdings Inc. and sports betting site DraftKings Inc. are among the companies that created SPACs in the past year.
Group Nine Media was formed in 2016 with the merger of Thrillist, NowThis, The Dodo and Seeker. It acquired comedy studio JASH in 2017, and bought women’s lifestyle brand PopSugar in 2019.